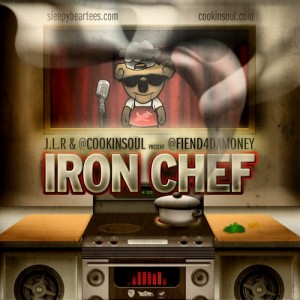 Fiend isn’t all that fiendish, as fiends go. As fiends go, he’s far more ”ish” than ”fiend”. If you download Iron Chef expecting Fiend to be some sort of Hitler with Hoez, Blinging Blofeld or Jiving Jeffrey Dahmer then you’ll be disappointed, because Fiend’s current rap persona is rather at odds with his name. He isn’t crazed or evil; he isn’t plotting to blow up the world with nukes or to write a gossip column for The Sun. The most nefarious scheme Fiend has hatched up recently probably involved giving inaccurate directions to a Pizza boy in order to extract a late-delivery deal from him; that or to take more than the requisite handful of Doritos when Curren$y’s absorbed in an episode of American Dad. Fiend the rapper is not a schemer, a butcherer, or a heroine-kidnapping moustache-twiddler: he is a stoner.

Things were different when Fiend started releasing music. This was back in the late ’90s, when Fiend belonged to Master P’s New Orleans notorious gangsta-rap label No Limit. On his No Limit LPs Fiend’s rapping resembled that of label-mate Mystikal (he of “SHAKE YURAHH! WARRJCHH YASEHL!” fame). He was gruff-voiced, furious, rhythmically and dynamically erratic; deliberately, intimidatingly unbalanced, as if barely holding himself back from kicking the mic’s head in or eating it. Fiend really sounded like a fiend back then, like some sort of demon, conjured up from the sweltering swamp heat of the New Orleans streets, itching and straining to escape the ghetto pressure cooker, dancing on the coals with frenetic – and kinetic – energy. No Limit’s in-house producers Beats by The Pound provided the musical paraffin: fizzing, sparking Southern Bounce rhythms and scorching, searingly bright G-Funk synth-lines.

Since then, Fiend’s music has mellowed considerably, and the only thing he’s really interested in setting alight these days is the finest Californian kush. His music has lifted off, leaving those New Orleans streets behind, and headed very much in a Westward direction, towards golden beaches, orange sunsets, orange juice and orange people: out of the fire and into the inordinately fried pan. Last year, a series of mixtapes (Tennis Shirts and Tuxedos, Cool Is In Session) cemented Fiend’s new supine steez, with now-nicknamed “International Jones” adopting the jet-setting, bong-sucking image and aesthetic of friend Curren$y. The sulphurous heat of the No Limit era production has been replaced with the warm glow of soulful strings and funky basslines, the unpredictable barrage-rapping with a treacle-smooth flow. Fiend’s new style is all smoke with no sweat. Iron Chef is the latest instalment in this series, and nothing more or less: it’s short (seven tracks in total), and of modest ambitions.

“We all wish we could sing like Fiend” says Curren$y in the intro to ‘Champagne’, Iron Chef‘s blissfully blunted opening track. Though he has a voice like Barry White (if Barry White drawled) Fiend sings more like another late great: the late great Nate. ‘Nobody Rides For Free’ sees him collaborating with Nate’s old homies Daz and Kurupt, and filling in for Nate by crooning unromantic things like: “I need cash, ass or hash” in a comically smooth and soulful way. But Fiend croons his raps as much as his melodies – that grizzled purring voice of his renders even his aggressive “fuck-off”s as amorous come-ons. Though he still observes and patrols the street (“Cruise through any hood, I’ll give you my evaluation / Drugs, money, niggas and bitches – retaliation”), any sense of violent threat is muted, or – more accurately – kept in reserve: Fiend could beat you up (and worse), sure! But he’s having too much fun right now.

Iron Chef‘s production soundtrack is relatively frictionless, too. Any rough edges are purposefully blunted, and although the resulting music is sometimes a little bland, it’s also full of catchy melodies and funky energy. As is the case with Curren$y, the dazed and dopey impression Fiend’s music makes on the listener is really a surface-impression, and one that is (usually) cultivated, at that. Beneath the leisurely, slurred delivery there are – or can be – rigorous and inventive rhyme-schemes at work. Occasionally on Iron Chef, it has to be said, you feel that the affected laziness of the surface has seeped deeper into the core of the music, making the whole thing sag like a stoner’s over-employed bean-bag. But when there’s something more substantial for Fiend to get his teeth into, he proves himself to be a wise, authoritative voice, capable of soulfulness that is authentically felt, rather than amiably mimicked. ‘Why We Do’ is the mixatape’s most lasting moment, a killer, bittersweet soul-loop putting Fiend into an introspective mood which sees him transcend the usual pleasant, but forgettable, good-times rhymes and confront a reality where “tourism the only reason they want the crime rate to drop”. Here he sounds even less “Fiend”-ish than ever, and every inch the wise old veteran that he actually is: “Momma forgive me… I stopped trynna make sense out it, and started trynna make rent out’ it…”