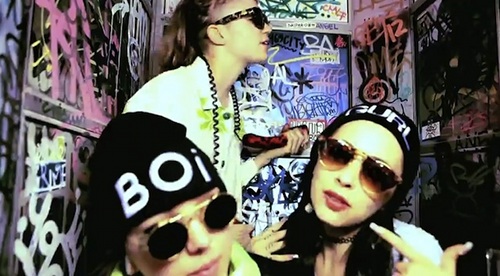 In a year that’s seen some unexpected supergroups (Skrillex/Diplo/A-Trak; Albarn/Flea/Allen), L$D is probably the freakiest.

The group’s roster is essentially an Avengers Assemble-style gathering of some of the most audacious artists operating at the fringes of pop. Canadian synth-sylph Grimes, irreverent/novelty rapper Kreayshawn, day-glo producer Blood Diamonds and Tragik all make the liner notes. Complex point towards a video for jump-off track ‘Don’t Smoke My Blunt B*tch’, produced by Grimes.

The song was supposedly cobbled together in ten minutes, and it shows. No Travelling Wilburries recording by committee here – ‘Don’t Smoke My Blunt B*tch’ is a messy car-crash of minds. At points, the gang sound like a scrappier Northern State, but there’s an endearing surplus of Riot Grrrl energy on display (something accentuated by Kreayshawn’s nagging “I’m the man!” hook). Tragik directed the psychedelic video, clearly cobbled together on the hoof and on a shoestring.