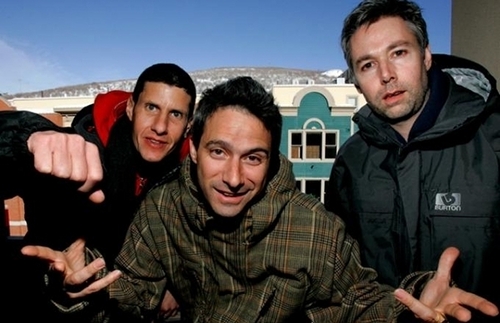 Both Mike D and Ad-Rock have been fairly incognito since the tragic death of fellow Beastie Boy Adam ‘MCA’ Yauch earlier this year.

On Tuesday evening, Ad-Rock ventured above the parapet to perform a DJ set in aid of persecuted Russian outfit Pussy Riot. The set, performed as part of an awareness event at Brooklyn’s Death By Audio club, was Ad-Rock’s first public performance since MCA passed away from cancer on May 4. According to The Guardian, the event was staged by feminist art ensemble Permanent Wave to help pay Pussy Riot’s legal costs.

Feminist punk-rock collective Pussy Riot been biting their thumb at the Russian authorities since the turn of the decade. The group are renowned for their distinctive balaclava’n’tights uniform. Having performed an anti-Putin show at Moscow’s Cathedral Of Christ The Saviour, three of the band’s rotating cast were subsequently arrested and charged with hooliganism. Considering that the charge carries a maximum tariff of seven years, their predicament is very serious indeed.

Other acts to appear at the show included Heliotropes, Shady Hawkins and TinVulva. More information is available at the Permanent Wave website.