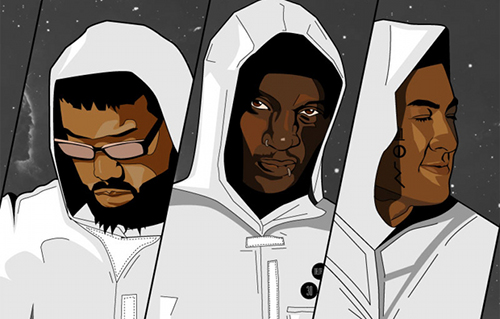 There was a fair bit of weirdo hip-hop floating about in 2000, and Deltron 3030 were some of the more listenable space cadets doing the rounds.

Deltron 3030 was a supergroup of sorts, uniting veteran rapper Del Tha Funkee Homosapien (aka Deltron Zero) with producer Dan The Automator and Ninja Tune turntablist Kid Koala. Their self-titled debut fused classic boom-bap with retro-futurist bleeps and whooshes. As high-concept records go, it’s unusually spirited and, crucially, an extremely fun listen. A follow up – provisionally titled Deltron Event II – has been mooted for some time, with Del making noises earlier this year that the record was on the way.

Prefix report that the duo are set to ride again with an album of new material. According to Dan The Automator, the new record is “done with one or two small touchups” left to finish. Speaking to CBC Music, the pair revealed they are pitching for a September release for the follow-up.

In Dan The Automator’s words: “Quite frankly, this is the record we wanted to make. We had a couple of false starts and everything, but once we got it going it was exactly what we wanted to have. I think anyone who liked the last record will like this record. But I think this record has a lot of interesting things happening and I think people will enjoy it.”