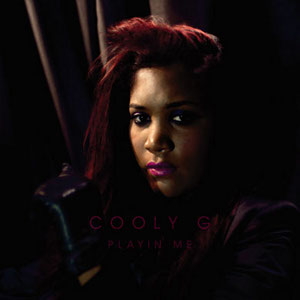 “Welcome to my world…” sings Cooly G, seductively, within the early moments of her debut album Playin’ Me, before murmuring something subtle but inaudible. And, before you’ve probably realised it, you’ve slipped comfortably into her warm embrace.

Cooly’s world is mesmerizing; woozy, fuzzy, hazy, sexual and warm. The lights are low and in the dim hue, edges blur and shadows flicker. It smells feminine and smoky.

The details of how South Londoner Cooly found herself here are, to a certain extent, peripheral to the full Playin’ Me experience. She first came to light as part of the UK funky scene around four years ago, with a MySpace page and Dub Organiser CD-Rs sold through Black Market records in central London. Music soon found itself to Hyperdub’s Kode9 and her dubbed out, percussive style was a perfect fit for the imprint as it, like many labels open to a touch of darkness, reacted to the desecration of dubstep. She released a handful of singles for the stable and began work on her LP.

So far so unremarkable but it’s at this point in many artist’s journeys that it can go all so wrong. You’re invited gently into their dimly lit bedroom, only for bright neon lights to slam on: ‘Spongebob’, Crusty the clown and a half a dozen Juggalo’s have downed all the Skittles and turbocharged WKD and have been waiting for you to begin the vomiting competition. A galling prospect, but one not unfamiliar when underground producers or MCs – who’ve built a loyal fanbase dedicated to a given vibration – decide to “take it to the next level” on their albums, before promptly losing every element you so loved about them. And in this regard Playin’ Me is perfect or thereabouts. Of all the Cooly G albums in multi-dimensional parallel universes, this is the best one, the perfect execution of her sound.

Back when he was first finding his sound, Mala talked about making “broken dub house,” and a decade later this is as good a summary for Cooly’s sound as any, with her delayed percussive touches, subby basslines and wistful Detroit pads. Tracks vary in rhythmic momentum – from driving to scattered and beatless. ‘It’s Serious’ and ‘Is It Gone’ sound like sedated jungle but, like all the album’s editions, always sound part of a greater whole. This sense of unification is what makes Cooly’s album better than good and is in many ways down to the album’s focused set of elements, the most important of which is her voice. When whispers suggested she was taking a more “vocal” route on the album, the spectre of Spongebob, Crusty and friends loomed, such is the potential for calamity when producers become “artists.”

Yes, Playin’ Me is essentially a vocal album, but only in the broadest sense. Her voice is omnipresent but used in diverse ways, as much an instrument in equal weighting to others as a prominent lyrical focus. At times Cooly is a songwriter, her intentions transparent: “Come into my room / The things that I’ll show you / I want to put you in the mood / You want me… I want you.” At others it’s less clear with tracks featuring little more than a word or breath, dubbed out and delayed, twisting around bed sheets and pillowcases. Like the art of seduction, less is more; her insinuations more spellbinding than, say, the brash bluntness of over-compressed vocal pop songs.

That’s not to say the album is flawless. The odd vocal embellishment sounds ill-advised and that’s before you get to the Coldplay cover, terrible not because of its source but of the disconnect between the unrelated keys the vocal and the piano parts are playing in. But these are minor details on an otherwise incredible album.