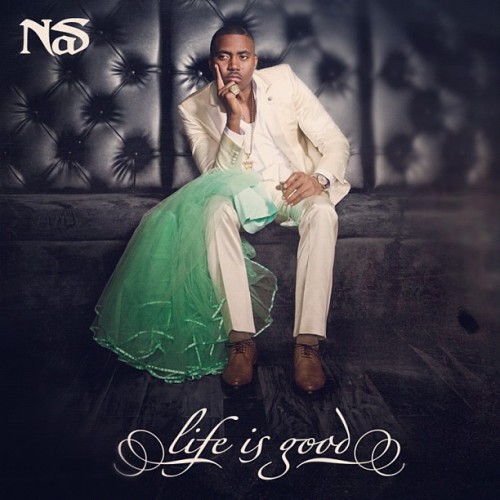 As already established, we have high hopes for the new Nas album.

The 10th studio album from the Queensbridge rapper, everything we’ve heard yet from Life is Good, from the soulful ‘Daughters’ to storming call to arms ‘The Don’, has been very promising indeed.

This evening, the tracklist for Life is Good was made public. ‘Daughters’, ‘Accident Murders’ and ‘The Don’ all feature, as expected, with a healthy dose of the production coming from No I.D. and Saleem Remi. ‘Cherry Wine’, another posthumous collaboration with Amy Winehouse (we’ve already heard ‘Like Smoke’) pops up on the album’s second half, while J.U.S.T.I.C.E. League, Mary J Blige, Art Dealer Chic‘s Miguel, Boi 1da and Swizz Beatz all stop by for appearances.

Overall, there’s 14 tracks with another 6 appearing as bonuses on the ever-irritating deluxe edition. Oh, and as for the album’s cover [above]? That green dress was worn by ex-wife Kelis on the pair’s wedding day.

Life is Good is due for release on July 17.