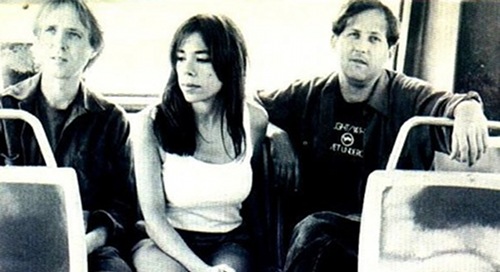 Take note, idle independents: Editions Mego continue to be one of the hardest working labels around.

The first arrives from Harry Pussy, the long defunct Miami noise unit. The band, which ran from 1992-1997 and featured a rotating cast of members, yoked Hoyos’ freewheeling vocal extemporisations to abrasive, scattershot guitar work (something Orcutt has continued to explore with his highly regarded solo work).

Mego are set to reissue the band’s long-lost final album Let’s Build A Pussy, originally given posthumous release in 1998. The record probably isn’t the best entry route for dilettantes: Let’s Build A Pussy features one second of Hoyos’ voice timestretched over an hour by Orcutt. Amusingly enough, the credits read “Bill Orcutt: Mouse, Adris Hoyos: Mouth”. The album will only be available on 2xLP, and drops on August 28.

Release two comes from Nick Edwards, better known as Ekoplekz. The Bristolian has previously racked up releases on Mordant Music and Punch Drunk, and his music falls somewhere between what you might expect from both releases: woozy analogue electronica with both an academic inclination and a dancefloor sensibility.

Plekzationz will be Edwards’ first release on Mego, and will feature four new tracks. The record will be his first release under his own name since an obscure tape release back in (gulp) 1994. As ever, it promises to be a lo-fi affair, recorded on a four track and nodding to classic dub and grotty No Wave. All of the tracks were recorded in the spring of this year, and the record was mastered at Dubplates And Mastering in Berlin. Plekzationz is out on September 4.