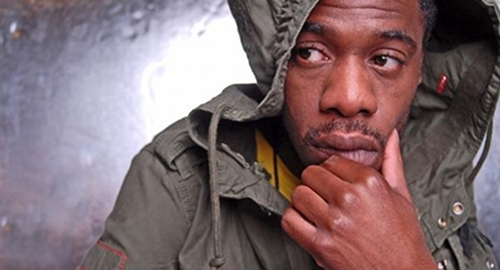 In our Lost And Found feature on Sensational’s grotty 1997 classic Loaded With Power, we celebrated the distinctive virtues of this “weed-wreathed cenobite”.

One of the Brooklyn rapper’s most fascinating qualities is his venturesome attitude to collaborations. Over the last decade, he’s racked up all manner of weird team-ups: he’s worked with avant-garde strummer Arto Lindsay in Anarchist Republic Of Bzzz, and phoned in guest verses for the likes of Nochexxx, Randfunk and Madteo.

The Quietus are currently hosting a stream of Sensational’s latest endeavour, a collaboration with dark electronica outfit Dead Fader. John Cohen’s production project first turned heads with 2010’s tough Corrupt My Examiner, a record that married dubstep scuzz and Perc Trax muscle to a boom-bap sensibility. Their collaboration, ‘Fishsh’, is far from an easy listen. There’s a hip-hop lilt to proceedings, but the razor-edge production is rough and unforgiving, liek a particularly mean Dälek B-side. Sensational is as off-script as ever, his inimitably mumble at once cryptic and oddly inviting.

The track is plucked from Dead Fader’s new EP, work it, no, which is due on Robot Elephant on July 20. Head here to listen.