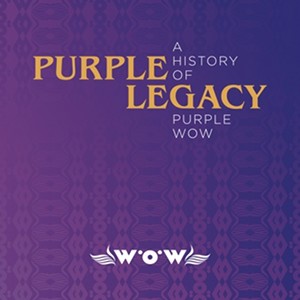 Available on: World of Wonders LP

Purple Wow: a sound with humble origins, sure, but animated by pretty big ambitions; a sound lying in the gutter outside some dutty Bristol rave, but with its sights fixed firmly on the stars. As so often happens, getting too close to those stars – or at least coming to see the stellar as a realistically attainable goal rather than some gauzy pipe dream – was its downfall. Undoubtedly, the moment when Joker, Gemmy and Guido were effectively rewriting the rulebook on UK dance music has passed. Still, hearing about this compilation left me feeling conflicted. Is it an unbearably stifling act of conscious legacy-making to be documenting and eulogising a musical movement barely four years after it emerged? Or is it evidence that UK dance music is still in rude health – that its lust for the new prevails, that the fresh cuts of 2008 are, in 2012, worthy of fossilising and not much else?

The sound pioneered, defined and in many ways run into the ground by Bristolians Joker, Gemmy and Guido emerged at a very specific point in the UK’s evolution: the point when colour flooded into the dank, greyscale environs of dubstep, threatening to consume the whole shebang and leave something entirely different in its place. Granted, they weren’t the only ones – but, joining in sometimes unlikely alliances with producers in Glasgow, LA, London and elsewhere, the trio were instrumental in defining the ‘trans-generic mutational agent’ once known as (whisper it now) wonky.

As such, Purple Legacy: A History of Purple WOW could be seen as a document of a crucial catalytic point in the UK’s recent musical history. Arranged in roughly chronological order, the first half of the compilation feels like a victory lap for the sound: outrageously catchy bangers present and correct, every one sending bolts of pleasure down long-neglected neural pathways. There’s ‘Stuck In The System’, lifted from Joker’s debut EP, where the orchestral bombast of grime is pushed to some new level – a slightly rough-cut sound at this point perhaps, but brimming with new ideas, strange configurations. Gemmy’s ‘Bk 2 The Future’ will make you misty eyed for dubstep nights circa 2008 – the balance between dystopic angst and something altogether lusher, sexier; that squiggly lead line, standing out starkly like a flourescent worm in the Mariana Trench. Joker and Rustie’s ‘Play Doe’ makes explicit the common axis between Glasgow’s hypertrophied hip hop mutations and the Purple sound – and in the process reveals the latent chart-busting potential of this music, at once uncompromisingly underground and almost shockingly accessible.

Post-2009, it’s only really Guido who stays interesting: 2010’s Anidea, represented here by the brilliantly cheesy ‘Mad Sax’, showcased a sound that was still fuzzy round the edges, still pushing restlessly outwards, trying stuff out. ‘Korg Back’, his contribution to Scientist Launches Dubstep Into Outer Space, is built on a coolly understated boom-clack more suited to a quiet smoke at home than the effulgent excesses of some imagined Purple rave. ‘Micro X’, the inaugural release on the producer’s own State Of Joy imprint earlier this year, may not be a drastic leap forward but remains similarly understated, held back, subtly cosmic – still concerned with the subtleties as well as the broader brushstrokes.

Elsewhere, things are far less inspiring. Joker’s late period is neatly summed up by the inclusion of ‘Tron’, the much-hyped (and equally derided) lead-in single to last year’s The Vision: a frankly tired-sounding exercise in serrated bass and garish lead lines, Purple with all the velveteen crinkles ironed out. Gemmy, meanwhile, has never quite managed to top his initial run of singles on Punch Drunk and Planet Mu (there was talk of an album for Mu back in the day, but it never materialised). Latter day Gemmy – the distended wobble of ‘Maroon Chant’, the lumbering dub-wise bounce of ‘Jah Know’, the schlockily sinister film samples in ‘Tales Of The Deep’ – feels almost universally second-rate, as if overly content with toeing the party line, going through the motions, working to the formula.

The latter half of the album sees a steady trickle of outside contributions: L-WIZ’s ‘Straitjacket’ betrays their Dub Police roots in its exhausting lack of subtlety, while Baobinga and Mensah’s ‘NSG’ ticks all the right boxes but lacks that ear for a killer hook. If the purpose of this comp really was, as it claims, to examine Purple’s legacy (dictionary definition: ‘something left or handed down by a predecessor’), then it would appear to be one of diminishing returns. Of course in reality that squiggly worm is everywhere now: shot through the contemporary underground, dictating the terms of melody’s return to prominence in a landscape almost universally in thrall to light, joy, funk. But the picture painted by Purple Legacy is of producers struggling with their own dwindling relevance, seizing on an opportunity to look back when there’s still so much to look forward to.