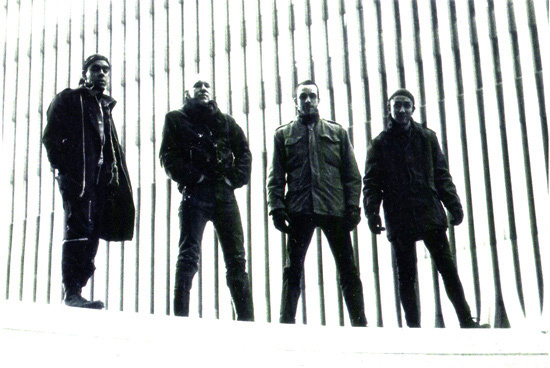 As previously announced, Blackest Ever Black has will host its second annual London showcase on Saturday 13 October.

The venue for the event has now been confirmed – the two-room, 500-capacity Corsica Studios – and tickets are on sale. Discounted early birds have already been snapped up, but regular tickets can be purchased for £12.50+bf here.

New Yorker Argabright will be making his UK live debut in the Black Rain guise, with a set drawing heavily on the brooding, rhythmic material reissued earlier this year by Blackest Ever Black as Now I’m Just A Number: Soundtracks 1994-95. As shown in a video clip shared by the label (see below), Black Rain began life as a rather more furious industrial death metal four-piece (also pictured above), resulting in some memorable live performances in the early-mid 90s. Here’s hoping Argabright channels some of this into his 2012 show.

Edinburgh duo Young Hunting will perform for the first time in London, heralding the release of their debut album on Blackest. Their histrionically gothic but incredibly nuanced Night Of The Burning EP was one of 2011’s most unique releases, and according to B.E.B. the new material marks “a move towards a more instrumental, meditative music, one framed by ritualistic techno rhythm and fourth world atmospherics.”

As already announced, the label will present the UK live debut of Vatican Shadow, Dominick Fernow’s acclaimed “militant religious industrial” project – apparently this is an exclusive, and there will be no other VS shows in this country, at least not in 2012.

Vatican Shadow started out as just one of the many different aliases that Fernow (pictured above) uses to release music on his own Hospital Productions label, but the project soon took on a life of its own, and in recent months has arguably eclipsed the now LA-based artist’s work as Prurient. Its sinister, isolationist and seductively rhythmic sound is partly inspired by the techno of FUSE, Polygon Window, Sandwell District, etc, while the ethno-industrial offerings of Muslimgauze have also played a significant shaping role not just on the music, but on the deliciously paranoid, War On Terror-obsessed aesthetic – what Fernow describes as its “atmosphere of degeneration”.

Also confirmed as a live headliner is Cut Hands, aka William Bennett. Bennett, founder of Whitehouse, is another purveyor of extreme electronics whose embrace of rhythm – in this case intense, fit-inducing polyrhythms played on African percussion instruments – has earned him a new and appreciative audience. Following the release of last year’s Afro Noise I album, Cut Hands has a new single, ‘Black Mamba’, due out in July on Blackest Ever Black, ahead of a sophomore full-length on Susan Lawly in Autumn.