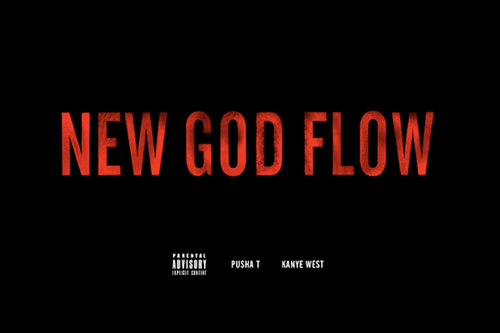 Sam’n’Spike excepted, ‘New God Flow’ was the most talked about track at this weekend’s BET Awards.

During his performance, Kanye dropped a verse from the track, which subsequently did some short-lived rounds online. A full recording of ‘New God Flow’ has now emerged under the G.O.O.D Music aegis, with Pusha-T taking top billing.

Pusha, oddly enough, does his best Kanye impression, trading in his languid flow for something rough-edged and breathless. Kanye, meanwhile, ladles on the pomp, asking “Did Moses not part the water with the cane?/ Did strippers not make an arc when I made it rain?”. It’s definitely a stronger cut than ‘Mercy’ and the ‘I Don’t Like’ remix; even if the closing boy scout stomp is a bit silly, Yeezy’s earned it.