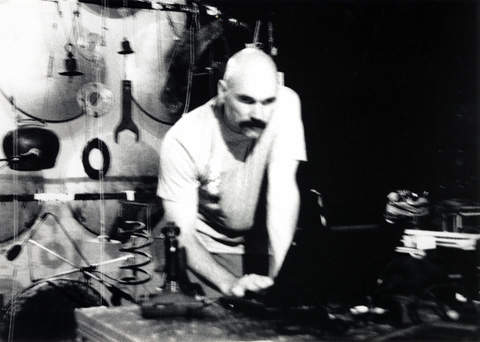 Bob Ostertag will make a rare UK appearance on Saturday 21 July, when he gives a talk and performance for Electra and OTO Projects in London.

A polymath to say the least, Ostertag’s practice encompasses composition, instrument-building activism, historical research and journalism – always returning, as Electra put it, to “the common ground and friction between music, politics, people and machines”. Beginning his career in the late 70s, he has gone on to collaborate with the likes of John Zorn, Fred Frith, Anthony Braxton and Mike Patton, and at the turn of the decade he moved to Central America, becoming an expert on the region – his writings have been published all over the world, and he has lectured at such prestigious institutions as Harvard, Princeton, Yale and Rutgers. Currently a resident of San Francisco, his books include Creative Life: Art, Politics, People, Machines (University of Illinois Press, 2009), People’s Movements, People’s Press : The Journalism of Social Justice Movements (Beacon Press, 2006), The Yes Men: The True Story of the End of the World Trade Organization (Disinformation, 2004). Most recently has he been brought to a wider audience thanks to his collaborative work with techno producer Rrose, the results of which include a brace of releases on Sandwell District.

His talk in London, titled What Is ‘Live’?, will apparently “emerge from thoughts on his practice and how it might be situated in relation to other people and apparatuses”. It takes place at The Shacklewell Arms, 2pm-4pm, and tickets are just £3; to reserve a place, email bookings@electra-productions.com.

Later that day, at 8pm to be precise, Ostertag will perform live at Cafe Oto with Cedric Stevens. For more information on this show, and tickets (priced at £8), click here. The talk and performance in London are part of a wider Europe tour, including a 2-day workshop at Steim in Amsterdam.