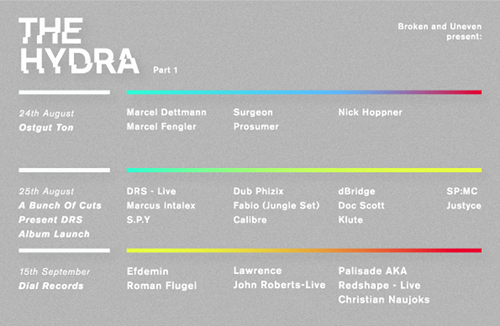 In their first year in business, Broken & Uneven have hosted everyone from Hyperdub to Planet Mu.

The upstart promoters have now assembled a cracking series of events to take revellers through Autumn and Winter. The fourteen event programme goes under the umbrella title ‘The Hydra’, a tip of the hat to the many-headed Greek beast and a comment on London’s heterogenous scene. All the events will run at a secret East London location, and there are some properly heavyweight players stepping up to bat.

Details have now emerged of the first seven dates in the series. August 24 will welcome Berlin’s Ostgut Ton, with Marcel Dettman, Prosumer, Nick Hoppner and the inimitable Surgeon all featuring on the bill. August 25 will see drum’n’bass take centre stage, with Calibre, dBridge, and Fabio (on a jungle tip) all lined up to appear.

September 15 will play host to a Dial showcase, featuring Lawrence, John Roberts, Efdemin and Redshape. Come October 13, Deviation will celebrate its fifth birthday with one of the best bills of the series: mercurial house talent Moodymann, Dam-Funk, Hudson Mohawke and Kode9. October 27 will be on a dreamier tip, with Ame and Dixon joining Tensnake, Todd Terje and Prins Thomas.

November 23 will welcome an R&S Records showcase; details are yet to be confirmed, but, knowing the label’s roster, there’ll be some very special guests on board. The following day (November 24), Nonplus will team up with Workshop to welcome Boddika, Joy Orbison, Loefah and Kassem Moss.

Further information is available from the Broken & Uneven website.