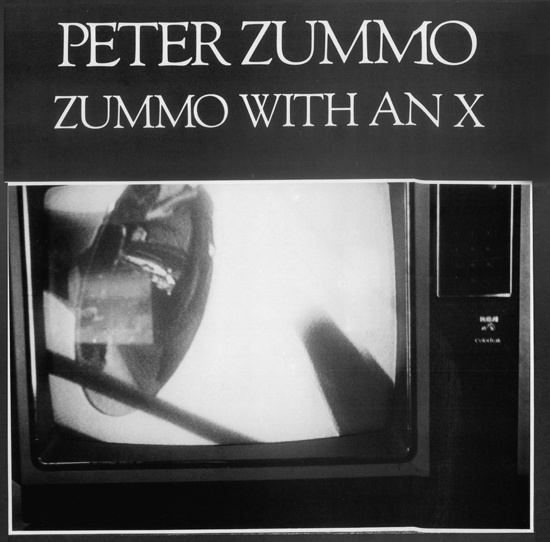 This month will see Optimo Music reissue Zummo With An X, a classic 1985 album by Peter Zummo.

In its three year lifespan, JD Twitch’s label has brought us new work from the likes of Factory Floor and Den Haan, but it’s most popular and important release to date was also a reissue, namely Chris Carter’s The Spaces Between (a vinyl edition of the Throbbing Gristle member’s 1980 solo cassette release on Industrial Records).

Twitch has dug back into the archive to come up with a 2012 vinyl-only edition of Zummo With An X. The original LP was limited to just 500 copies, and has been out of print for nearly 30 years. Zummo, born 1948, is a multi-instrumentalist (trombone, euphonium, synthesizer, electronics) and vocalist, who has described his musical practice as “minimalism plus a whole lot more.”

“I first discovered Peter Zummo when I first discovered Arthur Russell,” explains Twitch. “I kept hearing THAT trombone sound throughout Arthur’s music and through scanning through various label credits made the connection that this Peter Zummo character was a constant collaborator with Arthur. Zummo’s trombone sound is one of those things that if I am feeling anxious or pissed off will instantly soothe me and make everything feel alright.

“So, as well as wanting to hear everything Arthur had touched, I now also wanted to hear everything Mr. Zummo had created too. It’s worth bearing in mind that at this point, in the mid to late 90s, there was almost zero information online about Arthur or his music or his collaborators. The upside of this was that all his records weren’t too hard to track down and weren’t going for crazy money. I randomly found Zummo With An X in New York around 1999 and wasn’t sure what to expect. I instantly liked the first side, ‘Lateral Pass’ but side 2’s ‘Song IV’ took my breath away and remains to this day one of my most listened to records. Despite the minimal elements, I hear more in it every time I listen to it, and sometimes the perfect interaction between cello, trombone and percussion sounds like the voice of Arthur being beamed in from the aether. It is 20 minutes of sheer bliss that feels as if it could go on for twice as long.

“[…] It’s a great honour to be making this record available again and I can’t imagine anyone with even a passing interest in Peter Zummo or Arthur Russell’s music failing to be beguiled by this.”

Tracklist:
Instruments
A1. I, Half Steps
A2. II. Sixths
A3. III. Whole Steps
A4. IV. Sevenths
A5. V. Chromatic Fourths
A6. VI. Unisons
A7. VII. Four Notes, Large Intervals
From The Suite, Six Songs
B1. Song IV