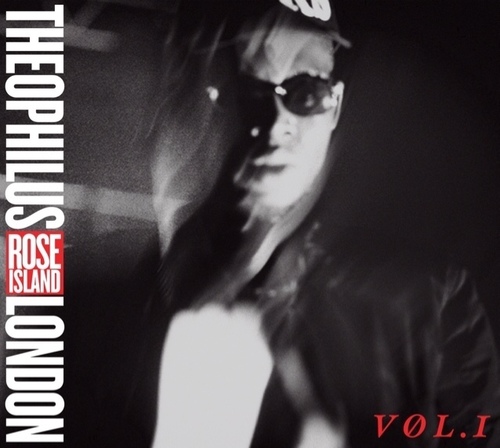 Theophilus London has always been the indiest of the current phalanx of indie-rappers.

The rapper/singer/slipper designer might throw Elvis Costello poses on his mixtape covers, but his music is shot through with a sensibility plucked from the more melodic ends of post-punk. He’s collaborated with Dave Sitek and Lightspeed Champion; last year’s debut album Timez Are Weird These Days, by contrast, called on Sara Quin of Tegan & Sara. He gets side-eye from certain quarters for being excessively preening, but he’s clearly an ambitious mind making the most of hip-hop’s current tolerance for heterogeneity.

As those Big Boi and A$AP Rocky team-ups suggested, London’s got some well-chosen friends, and they’re all out in force on Rose Island Vol. 1. Both of the above get guest feature credits, as do (rather disingenuously) Sade and Marvin Gaye. Production arrives courtesy of Lunice, Machinedrum and Mark Ronson. Andre 3000’s The Love Below is clearly an influence in terms of tone and scope, with the mood tilting from squiggly boogie funk to giddy-up electro. Santigold’s a much better reference than, say, Main Attrakionz – this is a cosmopolitan pop album flecked with the occasional residual trace of London’s hip-hop allegiances. [via Playground]