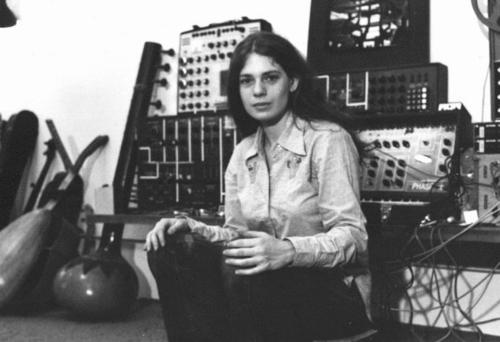 Laurie Spiegel’s 1980 LP The Expanding Universe – something of a touchstone for synthesiser buffs – is now getting a suitably expanded reissue.

The Expanding Universe was created in the years 1974-77, predating recently reissued works like Jean Piché’s Heliograms or Monoton’s unbelievably good Monotonproduckt 07. Spiegel began composing with a Buchla synthesiser in the late 1960s at the Julliard School. The Expanding Universe took shape during her tenure at Bell Laboratories alongside Max Mathews and F.R.Moore, where she worked with the GROOVE (Generated Real-time Output Operations on Voltage-controlled Equipment) machine. All of the tracks on the record are based on a single electronic sound source, and remain striking in their intricacy and complexity.

Unseen Worlds are now releasing a new version of The Expanding Universe, and it’s a whopper. In its original form, The Expanding Universe featured four unique compositions. Unseen Worlds’ version boasts fifteen extra tracks from the same period, most of which will be getting their first ever release. A 24 page book is also included in the package, featuring contemporary photos and notes from Spiegel. The set has reportedly been four years in the making.

The Expanding Universe will arrive in September on 2xCD and transparent white vinyl. The latter will be limited to 500 copies. [via Playground]