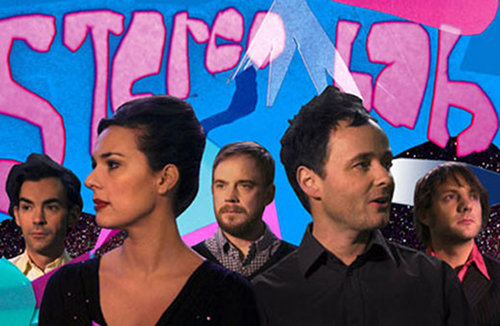 Transient Random Noise Bursts With Announcements (1993) and Mars Audiac Quintet (1994) have both been repressed in deluxe double vinyl reissues. 1972 Records – also responsible for that recent reissue of Aphex Twin’s Selected Ambient Works Vol. II – are behind the new editions.

Following on from the band’s first full-length Peng!, Transient Random Noise Bursts With Announcements was Stereolab’s major label debut for Elektra. The record had something of a troubled gestation, with sample clearance issues and a botched first pressing making for a less-than-smooth release. Not that you’d know it: the record was Stereolab’s most exuberant yet, and the first to really see them investigate exotica and world music sounds in earnest. Scuzzy and cheery in equal measure, it’s a clear stepping stone to where they would head next.

Mars Audiac Quintet , meanwhile, is still renowned as the band’s most immediate record. The record capitalises on Transient Random Noise Bursts With Announcements‘ softer tendencies, and compliments the polish with a new emphasis on melody. ‘Ping Pong’ and ‘Outer Accelerator’ still speak for themselves, and the band’s whirring rhythm machine sounds like it’s really found its groove for the first time.