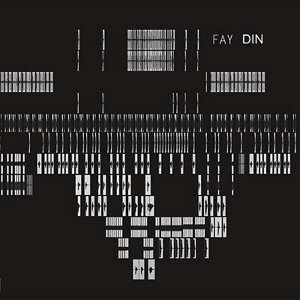 Available on: Time No Place LP

What the hell is this and where did it come from?

Boomkat weren’t wrong when they described Los Angeles-based Pit er Pat member Fay Davis-Jeffers’ debut solo album DIN by referencing the production of Timbaland circa 2001. With the focus primarily on vocals and tabla, the record instantly recalls the percussion flurries of Missy Elliott’s ‘Get Ur Freak On’, but there are plenty of other allusions to Timmy T’s impeccable sense of space, pace and register.

DIN is very much music for the body, inspired by traditional musics such as tabla gharana, zouk and gamelan, but using editing techniques popular among electronic musicians to create an interesting bridge between the two styles. FAY ignores simple metre to create block-like structures that move fluidly between thickness and minimalist; as seen from the cover artwork and confirmed through listening, audio is mercilessly cut, not through fastidious micro editing around a rigid pulse but rough sheering and hewing. As composer and arranger FAY acts in a sculptural fashion with all of the elements at work, but in a more pop-song structure of steps than, say, the freeform nature of Mutamassik, whose style she could be compared to.

While many popular music reviews make well-meaning but inaccurate claims about music containing polyrhythmic pulses or complex time signatures, DIN actually does possess them. Standard fair for generations of tabla performers, the results are palpably brilliant when applied with knowledge and skill to this particular setting, sample-based music having always been celebrated when escaping from the rigidity that technology imposes.

‘Whats The Use’ is therefore a superb example of rhythmic tension and economic construction, tabla paired with falsetto yelps and whimpering to create something beautiful yet unsettling. ‘That’s The Part’ applies a typical dancehall rhythm to a simple sample hook before unexpectedly and repeatedly pulling all metric predictability apart with complex subdivision. ‘Talk With My Body’ lassos itself with a lazily oscillating UFO melody and a 4/4 pulse, but phrases between all other parts slip and slide in a cunning manner. Opening track ‘How It Feels Good’, however, takes the prize, its bass pulse, in both double and triple time, simply a pivot point for many overlapping, interacting layers.

Fascinating complexity from such simple components shows everything FAY is capable of. However, in the case of ‘How It Feels’, presenting this as the first track unfortunately means that DIN’s initial shock wears off as it becomes apparent that the album’s palette isn’t going to stray too far.

This is not to say that the album does not have variation; where it does not recall Timbaland or Neptunes, DINpossesses a similar moody coyness to Tom Waits’ Mule Variations or Blood Money, blues meditations with a wry humour, strange parallels with Santigold and Julia Holter at work. ‘Time To Die’ floats around Creole bongo rolls and collaged breaths, and ‘Between’ sets a ponderous, lo-fi, over-driven piano against an insistent stuttering chord and drums. ‘Shadow II’ has thick, rotary-speaker Rhodes playing out acid-soul licks around light, rattling, computer shredded percussion and ‘Use’ is fantastically obtuse in its winding high-register melody, fuzzy step bass and angular piano contributions, everything jutting and bug-eyed.

As the approach becomes more familiar, some of the details begin to stick out as questionable. The vocals, haunting in most places, can be slightly grating in others, such as the Lamb-like jazziness of ‘Shadows II’. The references of ‘Let It Go’ also become aggravating very quickly in its drastically pitch-shifted wails and cringe-inducing (to this reviewer) ‘hands off my cookies, boy’; possibly condensing too much cheeky r’n’b allusion in one go.

However, despite niggles which may come down to individual taste, DIN does remain absolutely essential listening for anyone with even the vaguest interest in unusual approaches to popular genres and rhythmic experiments in dance music; definitely a project to be applauded.