The band, active in the 1980s and early 90s, have fallen out of fashion in the last two decades, and their name now means little to most people under the age of 30 – but, as Simon Reynolds argues in his accompanying notes for the OLI release, it would be inaccurate to describe them as a “lost” or overlooked band.

“Not only were A.R. Kane renowned and revered [in the 80s], but, in certain quarters, they were regarded and written up as one of the central groups of their era. The singles and albums received rave reviews (and when I say “rave” I mean frothing at the mouth, purple-prose-drooling paeans). Their faces appeared on the front covers of the British music weekly papers. But A.R. Kane weren’t just critics’s faves either. 69, their debut album, topped the independent charts in the summer of 1988.” 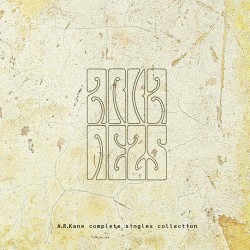 Despite being considered the equals of My Bloody Valentine and the Pixies at the time, A.R. Kane – at its core a duo comprising Alex Ayuli and Rudy Tambala – have been somewhat written out of history. Any lip service that is paid to them these days, tends to focus on their collaboration with Colourbox as M/A/R/R/S, which yielded the Number One single ‘Pump Up The Volume’, released by 4AD in 1987.

As Reynolds writes, A.R. Kane’s music was initially compared by the music press to that of The Jesus & The Mary Chain, but in interviews they denied any significant allegiance to indie-rock, instead citing the likes of ECM’s Azymuth, Miles Davis, Weather Report and black post-punk group Basement 5 as influences.

Debuting in 1986 with the ‘When You’re Sad’ 12″ on One Little Indian, they signed to 4AD in ’87, releasing the Lollita EP, produced by Cocteau Twins’ Robin Guthrie. The following year they decamped to Rough Trade, where they would release landmark records like the Up Home! EP (1988) and the albums 69 (1988) and  “i” (1989); come the 1990s, Ayuli and Tambala established their own label H.ark! and, in ’94, delivered their final album, New Clear Child. Their Rough Trade recordings in particular strongly influenced emerging shoegaze, psychedelic and post-rock groups like Flying Saucer Attack, Slowdive, Bark Psychosis and Disco Inferno.

One Little Indian’s Complete Singles collection, which will be available on CD and digital, brings together 32 tracks from the following releases: