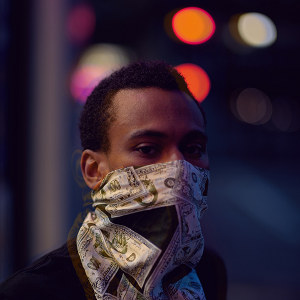 Weirdness without heart is doomed to fail. That’s why most people picks Burroughs over Oulipo; why Jam works and Tramadol Nights sucks; why Season 1 of Twin Peaks has pride of place in your DVD cabinet, and Season 2 has pride of place under the short leg of your wobbly table. It’s a degree of coherence/conviction – some sense of purpose, or, at the very least, curiosity – that separates the wonderfully odd from the wilfully obtuse. The latest record from Chicago beatmaker and rapper Jeremiah Jae is a textbook example. It bombards you with quirky detail; it swerves in different directions; it feeds Dr. Strangeloop, Sun Ra and The Oktopus through a mangle. Which begs the question: how can a record with so many tics sound quite so faceless?

Jeremiah Jae’s been knocking around with Flying Lotus’ Brainfeeder crew for a little while. Like Ras G, he once seemed to fall somewhere between eremite and space cadet: his productions were definitely out there, but there was a furtive quality that suggested Jae was happy tending to his own little private plot of hinterland. 2010’s DXNCE, still his best release to date, was a genuinely exciting record, flitting from groggy doo-wop to rough-edged electronica. Jae’s been marketed as an avant-rap weirdo, and listening to his older records, you can see why.

Unlike its predecessors, though, Raw Money Raps is very explicitly a rap record – or, more explicitly, a rap record viewed through a psych-rock filter. Jae’s default setting on Raw Money Raps is muggy beat music – just about too sedate to really be invigorating, and just about too busy to drift harmlessly into the background. Tempo and tone are sluggish throughout, and it’s a fairly draining listen as a result. About 75% of Raw Money Raps’ moves, it should also be noted, have been cribbed from the Madlib book of beat-making. Tweety Pie pitch shifting, curdled soul loops, scraps of vintage radio advertisements – they’re all here, and very difficult to avoid. Occasionally, as on  ‘Leaders’, it sounds great. But when singularity is clearly such a crucial part of your enterprise, the naked similarities start to become frustrating.

The newly prominent rapping is especially problematic. Jae’s voice appeared sparingly on DXNCE; when it did, it was as likely to croon and moan as it was to rap. Here, his weakling double-tracked mumble isn’t fit for purpose. Without the charisma of a Lil B – or even a Haleek Maul – his free associations simply come over as sloppy. It’s arguable that bunging even the tightest MC onto one of Jae’s tracks is a fool’s errand; his best music is freewheeling and exploratory, and loses some of its charm when prepped with a rapper’s needs in mind. Jae’s lumpen flow has a quantising effect: it locks down beats that are designed to soar. On this record at least, Jae’s voice brings absolutely nothing to a party it wasn’t invited to.

To Jae’s credit, there’s some great material on the record. The lovely ‘False Eyes’ is the sort of rough-diamond dirge that wouldn’t sound out of place on Gonjasufi’s MU.ZZ.LE. Same goes for ‘Hercules Vs. The Commune’, a soapbox rant in which Jae sounds genuinely triumphant. In the right mood, the juddering ‘Guns Go Off’ – which sounds like an NWA track played on a broken Commodore 64 – really hits the mark. Yet, even with these moments of respite, Raw Money Raps is a still a slog. It’s an album you might feasibly dip into, but one that’s simply too dreary to spin end-to-end.

We all know a faker: think of that half-hearted Goth who played cornet in the school orchestra, or that squatter you met with a MacBook Pro and an MMath. Jae’s not quite a member of their measly tribe, but there’s still an undeniable hollowness to Raw Money Raps. The album wants to be eccentric, but it severely lacks personality; Jae wants to be a rapper, but ends up being a cipher. The press machine humming behind Raw Money Raps insists that Jae’s an inspired futureshocker, an adventurer (acid-) tripping the light fantastic. But none of that bluster’s going to stop Raw Money Raps being what it is: a Quasimoto facsimile, rendered on tissue paper.