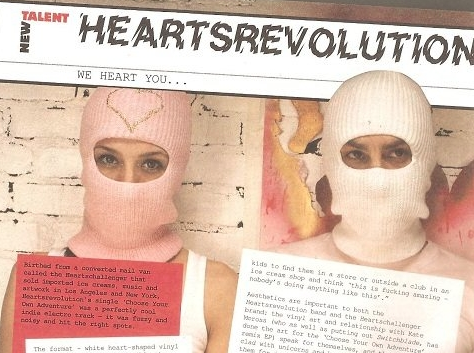 Since its beginnings in 2003, FACT has always had its finger on the pulse. Sometimes, though, that pulse has been incredibly weak. Often what we took for signs of life, were in fact intimations of death.

Earlier this week we were thumbing through back issues of the now defunct print edition of FACT, which was published bi-monthly between 2003 and 2009. As trips down memory lane go, it was an illuminating and occasionally surprising one – for every act in its pages that we’d accurately tipped for greatness, there were at least two that had disappeared without a trace. Soothsaying is a dirty business; today we’ve decided to come clean and remind you of 10 artists and bands that we told you were going to conquer the world.

We were wrong. So wrong. 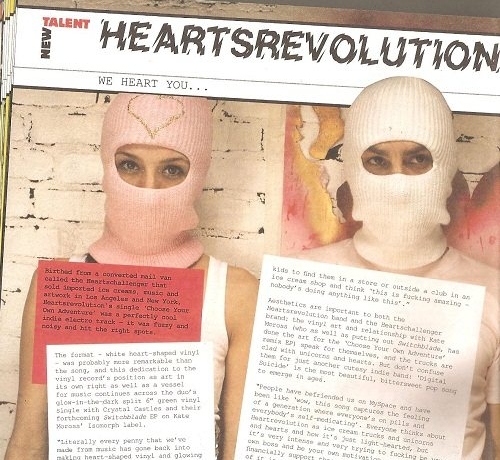 FACT has made some odd choices in its time, but picking Heartsrevolution B-side ‘Digital Suicide’ as our #1 track of 2008 remains one the oddest. We still (just about) stand by the track, part of the Switchblade EP first released on Kate Moross’s Isomorph label, but, well, the rest of the EP sounds as dodgy now as it did back then. As for the ice cream van-riding Heartsrevolution themselves, who knows what became of ’em? Their last proper offering was a remix-heavy CD EP on Kitsune in 2009. 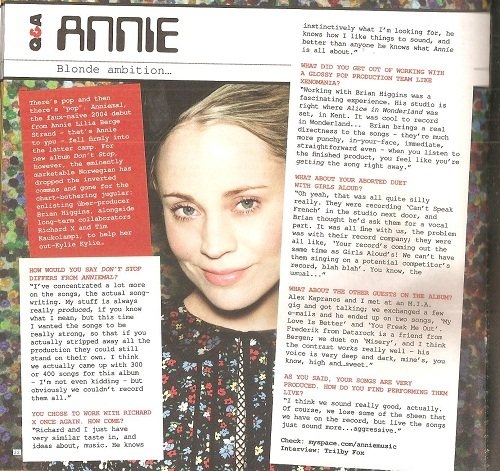 Poor Annie. Having set alternative pop hearts swooning with her sprightly 2004 album Anniemal, she seemed all poised for major crossover success with the follow-up. She signed to Island for this sophomore effort, and dutifully turned in a sparkly, hook-heavy set of songs bolstered by production from Richard X and Girls Aloud favourites Xenomania. But Island, as major labels are wont to do, kept pushing the release date back for no apparent reason. Frustrated, Annie finally released Don’t Stop on Smalltown Supersound in 2009, five years after her debut, by which point no one – except, er, FACT – really gave a toss. 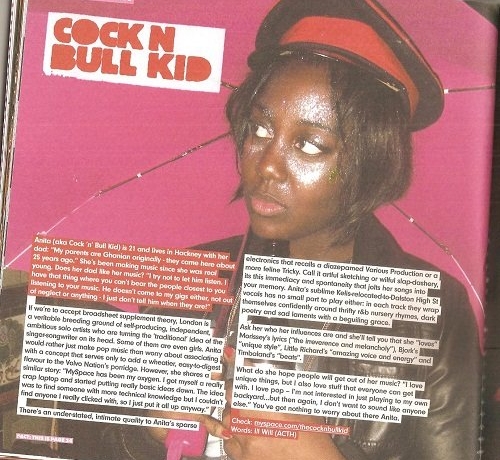 Cock N Bull Kid has to rank among the most PR’d, over-hyped acts of FACT’s lifetime. She was first introduced as a “new talent” in 2008, and proceeded to rack up column inches in every rag going – FACT included – but little in the way of a fanbase, or indeed a set of credible songs. By the time she got around to releasing her debut album in 2011, everyone had figured out that her music was largely bull, if not all-out cock. 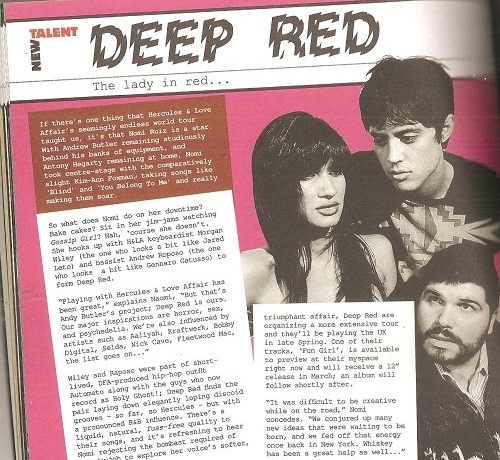 The magic of Hercules & Love Affair’s debut album had a lot to do with the presence of Antony Hegarty, but it was the vocal power and stage-presence of towering, sassy transsexual Nomi Ruiz that made their live performances such a rapturous experience. A prolonged period of heavy touring lead to friction within the ranks of Andy Butler’s troupe, and eventually Nomi jumped ship – taking two rather anonymous band members with her – and founded Deep Red. For reasons we can’t quite remember, they ended up changing their name to Jessica 6. Last year’s debut album, See The Light, probably gained traction somewhere, but certainly not in this office. 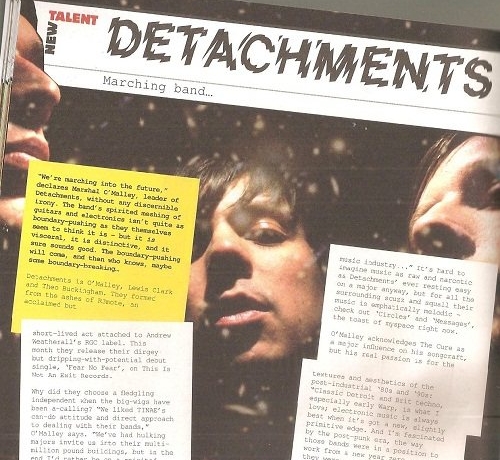 They say that there’s always a market for mouthy young men from the north of England making gloomy-yet-anthemic art-rock, but Detachments managed to buck the trend and make no impression on anyone, anywhere. They signed to a pretty cool label (Thisisnotanexit), they looked good (in a derivative Joy Div-ish sort of way) and they went out of their way to sound ambitious and full-of-themselves in interviews. Still no one listened, perhaps because their post-punk-by-numbers songs – last heard on their self-titled album of 2010 – were never really ever that good. 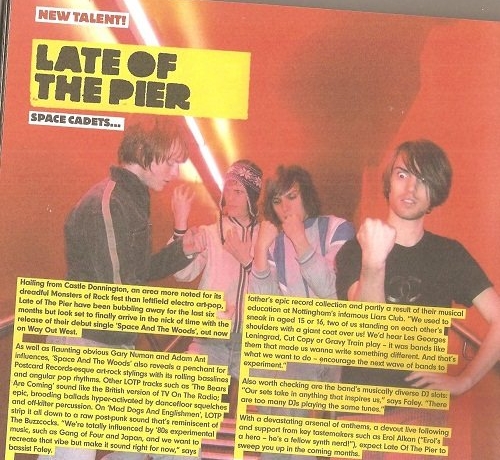 LATE OF THE PIER

We actually really liked Late Of The Pier, and we weren’t the only ones. For a time it looked like they’d be the tortoise to Klaxons’ hare: the one band to come out of the “nu-rave” (Christ, can you remember?) explosion who were actually going to mature, in their own time, into something interesting and vital. Their debut album, Fantasy Black Channel, was silly in places, brilliant in others, and certainly refreshingly weird throughout. The follow-up would have been, could have been, huge. Instead, LOTP disappeared off the face of the earth – a fate that befell a lot of bands who signed to EMI around 2008-10, come to think of it. 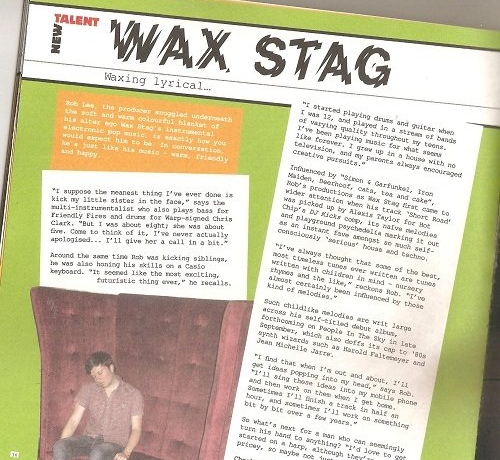 In between live duties for his mates, the fledgling Friendly Fires, Robert Antony Lee found the time to make breathtakingly pretty, charming, faux-naive electronic fantasias under the name Wax Stag. His self-titled 2009 album was a bit much, but the EP that preceded it – 2008’s Short Road – remains a classic, one that anticipates a lot of the retro synth stylings that have become so trendy and depressingly ubiquitous since. 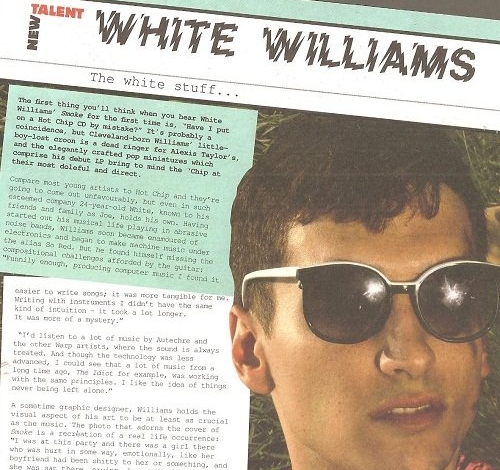 What the hell did happen to White Williams? At its best, his lean, mean new wave pop went down a treat here at FACT HQ. Indeed, we were willing to ignore the more pedestrian fare on his debut album – one of the first releases on Domino’s Double Six imprint, now home to the likes of Spiritualized and King Creosote & Jon Hopkins – if it meant we got to enjoy bona fide killer pop songs like ‘Violator’ and ‘New Violence’. That LP came out in 2007; there hasn’t been a peep out of Williams since. 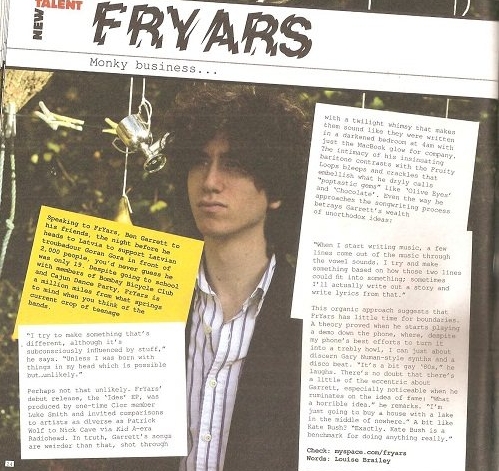 Though we were never particularly sold on Fryars’ music or persona – a ham-fisted amalgam of Patrick Wolf, Rufus Wainright and Mika – in 2007 he still looked like someone who might have some pop clout, eventually. Some well-received singles seemed to confirm this, but it took two long years for his debut album to emerge – through his fan-funded frYarcorp imprint, part of the then much-hyped but now forgotten “Bandstocks” system. It frankly wasn’t worth the wait. 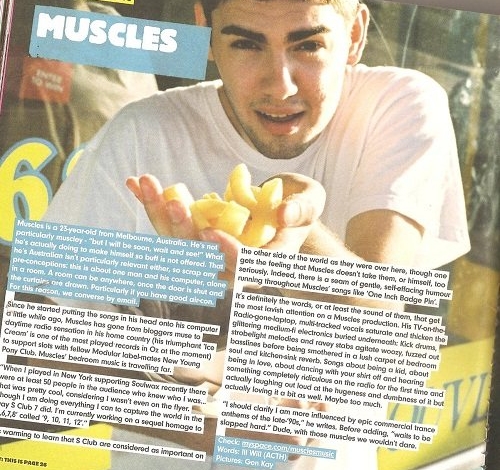 The Aussie-centric Modular Records “scene” that built up in the 2000s was not without its successes (Cut Copy being a notable example), but a rather damningly large number of its artists who enjoyed an initial buzz have since ended up on the scrapheap, of thereabouts. Ladyhawke and Muscles are the two that spring most readily to mind – and unlike Ladyhawke, Muscles didn’t even have the decency to turn out a half-decent debut album. To be fair, we probably shouldn’t have ever expected much from some smart-arse who claimed to want to “capture the world in the way S Club 7 did”.