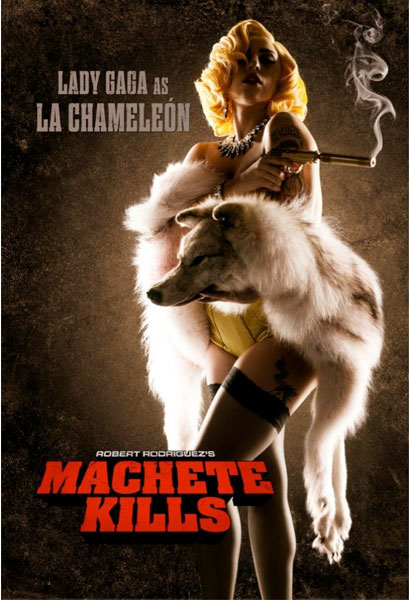 The follow-up to 2010’s bloody Machete, the film also features Jessica Alba, Charlie Sheen, Mel Gibson and more, and is scheduled for a 2013 release. Rodriguez’ past work includes Planet Terror (part of the Grindhouse set that he shared with Quentin Tarantino and others), Sin City and From Dusk Til Dawn. The Texan director announced the news on his Twitter account, posting a link to the poster and stating that Gaga “kickes SO MUCH ASS! Holy Smokes. Blown away!”

Gaga confirmed the news, stating “yes its true, I will be making my debut as an actress in the amazing MACHETE KILLS BY @RODRIGUEZ IM SO EXCITED!!! AH! Filming was insane”, via Billboard.

This September, of course, sees the launch of the press campaign for Gaga’s as-yet-untitled new album and the follow-up to last year’s Born this Way. The first step in the campaign will be the title, due to be revealed in its first month.