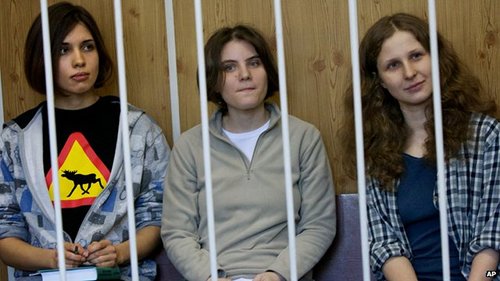 All eyes are on the three members of Russian punk band Pussy Riot who are today facing charges of “hooliganism” driven by “religious hatred”.

As The Guardian reports, the charges, relating to a “punk protest” that the trio staged in Moscow’s Christ the Saviour cathedral earlier this year, could land the three women up to seven years in jail. Maria Alyokhina, Nadezhda Tolokonnikova and Ekaterina Samutsevitch took to the altar and conducted a “punk prayer” calling for President Putin to leave office. They refute the charges, with Tolokonnikova – who has since gone on hunger strike – stating that they hadn’t meant to offend anyone.

Pressure to convict is coming from senior members of the Russian Orthodox Church, who consider the stunt blasphemy and have close ties with Putin. The band have become a figurehead of dissident activity in Russia in recent months, with support flooding in from the West as well as from like minds in Russia. It’s unclear how long the trial will take, but a recent ruling ensures that the three women will remain in custody for at least another six months.

Update: The group have pleaded not guilty in court, though Tolokonnikova has said that the group are prepared to apologise for any potential pain that their performance has called. The BBC report that “in a written statement, band member Mariya Alekhina said the performance was an administrative offence, but had become a criminal case “as a result of the influence of political, law-enforcement and spiritual elites”” . All three members of the group then “stood up and answered a series of questions from the judge in turn, which included their educational level, citizenship and the birth dates of their children.”