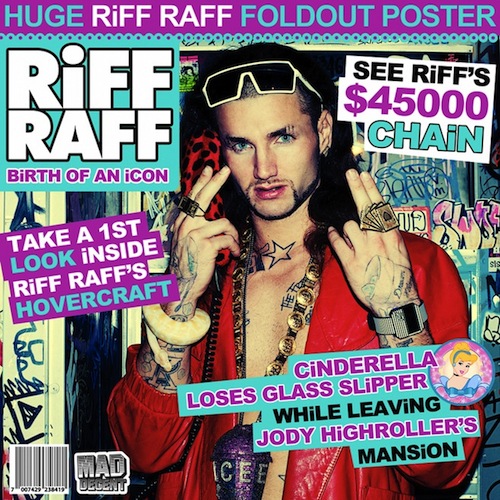 The eccentric rapper makes his Mad Decent debut on August 8.

Jody Highroller, the artist alternatively known as MTV Riff Raff, Riff Raff SODMG (Stacks on Deck Money Gang) and now simply RiFF RAFF is set to release his debut album. The one-time reality show contestant with the MTV neck tattoo has been making waves with his nimble throwback rap, skills surprising only because of a ghetto-glam aesthetic that borders on gimmick and parody.

BiRTH OF AN iCON is a compilation of old and new tracks, with cover art that resembles a teeny bopper mag from an alternate universe. Yet no matter how authentic his style, we’re not sure that a white rapper giving an album a title that references Birth of a Nation is a great idea. Stream new track ‘TERROR WRiST’ over at Pitchfork and read his recent Forbes (!) interview.