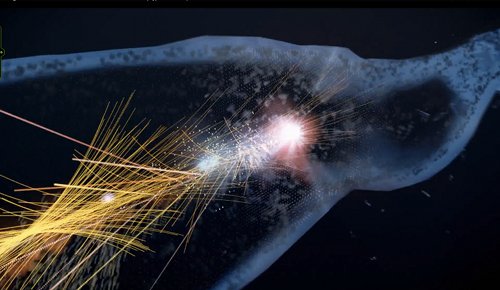 Ex-Spacek drummer Morgan Zarate is best described as one of Hyperdub’s secret weapons.

The densely psychedelic halftime dubstep of last year’s ‘Hookid’ was something of a bolt from the blue, sounding quintessentially Hyperdub but also standing apart from many of its peers. Its ambitions may have been more or less stadium-sized, but Zarate’s fiendish attention to detail placed it well ahead of the pack.

Since then, we’ve not heard much from the guy – not on Hyperdub at least. But ‘Broken Heart Collector’, featuring the vocal of Stevie Neale, is a rambunctious return to form, riffing on a similar formula but further drawing out its pop potential. Neale’s vocal is strong and assured, and the melodic gestures pretty broad-brush, but Zarate really goes the extra mile with those swarms of textural detritus scooting across the background.

The video, directed by unsung.nu, features clouds of celestial matter rendered in pristine 3D – a suitably synthetic accompaniment. ‘Broken Heart Collector’ is out soon on Hyperdub – no release date confirmed as yet.