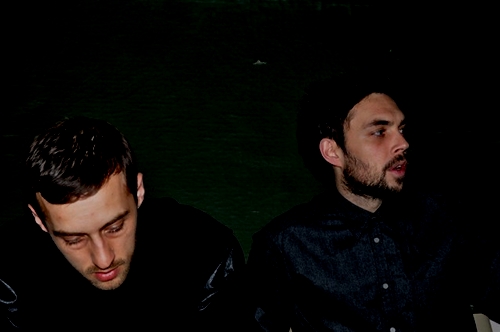 Raime have announced the release of their debut album in Autumn 2012.

The Hackney duo of Joe Andrews and Tom Halstead have built up a cult following off the back of their three releases to date: the Raime EP, which was rooted in samples sourced from goth and industrial records from the late 70s and early 80s (first edition copies of this now out-of-print record, which came out in September 2010, change hands for over £40 second-hand); a couple of months later the more skeletal single ‘If Anywhere was here would know where we are’, backed with arguably a career-best remix from Regis; and late 2011’s Hennail EP, which was comprised of two driving, richly textured rhythm tracks that felt like the most convincing synthesis to date of the Londoners’ obsessions with jungle and post-punk musics.

There have also been two limited edition CD-R and DVD-R/CD-R releases, the You Can’t Hide Your Headcrack “mixtape” (2010), and The Three Chambers Of Our Entities / Living In The Gaps We Cannot Jump (2011), part of which was a 5.1 surround sound DVD-R sound documenting a sound-work they created for the 2011 Unsound Festival New York. A 2011 FACT mix saw the duo zone in on noirish but decidedly rugged drum ‘n bass from the ’94-’96 era.

Their album is entitled Quarter Turns Over A Living Line, and, like everything they’ve issued so far,  it comes via the London-based Blackest Ever Black*. Not much else is known at this time: only that it features seven new tracks by Raime, will be available on 2×12″, CD and digital formats, and is due out in Autumn. More information when we have it.