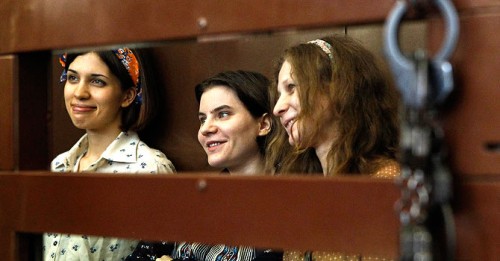 The three women stand accused of “hooliganism” motivated by “religious hatred” after staging a “punk protest” in Moscow’s main cathedral. In her closing statement, Nadezhda Tolokonnikova called the charges levelled against the trio a “political order for repression”, describing Putin’s Russia as operating under a “totalitarian-authoritarian system”.

As we previously reported, prosecutors yesterday called for a three year sentence to reflect the severity of the women’s crimes, describing their use of swear words in church as “an abuse of God”.

The judge fixed the date of August 17 to return to hear the verdict of the case. The band’s lawyers had been expecting a conviction and the full three year sentence to be meted out to the women, but the judge’s delay in sentencing has, they say, called this into question.

Lawyer Nikolai Polozov said that international sympathy and celebrity support for the band’s plight had made a difference to the case. “To take a quick decision under such pressure is very dangerous for the authorities, so they’ve taken a time out,” he said. “No matter what the verdict is, we have won.” Tolokonnikova agreed, claiming that “Even though we are behind bars, we are freer than those people”.