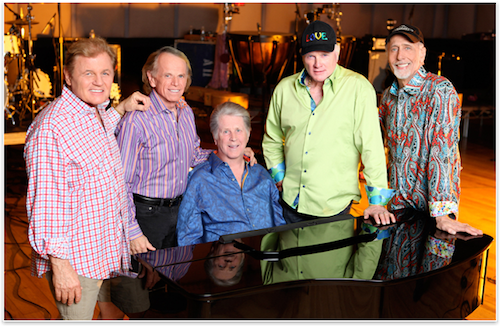 Update: the fun in the sun continues with DVD documentary The Beach Boys: Doin’ It Again, a behind-the-scenes look at both the reunion and the band’s legacy, out on August 28. [via CoS]

The California pop legends continue their 50th anniversary celebration with reissues and compilations.

On the heels of their new record (That’s Why God Made the Radio) and in the midst of a reunion tour, the Beach Boys will continue to feed the good vibrations with a host of releases.

The compilations, entitled Greatest Hits and Greatest Hits: 50 Big Ones, will be released on October 9 via Capitol/EMI. They will contain twenty and – you guessed it – fifty of the group’s most beloved songs. A career-spanning box set is also planned for this year, with details forthcoming. For now, watch a recent performance of the band’s newest single, ‘Isn’t It Time.’