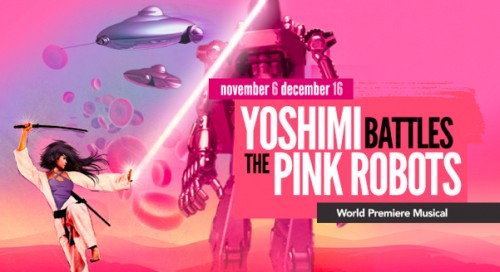 Back in March, details emerged of a musical based on The Flaming Lips’ 2002 album Yoshimi Battles The Pink Robots.

A press release that emerged today confirms the dates over which this “dazzling multi-media experience” will be performed. Taking place at San Diego’s La Jolla Playhouse, the show is set to open on November 6 and will run through to December 16.

The musical will follow the (admittedly loose) narrative of the album, concerning a young artist who, cut “adrift from her family and lover”, has to “wage a war with fate” in a “fantastical robot-world”. Co-written by Wayne Coyne and the Playhouse’s Artistic Director Des McAnuff, the show is described as a “poignant, humanistic story about the triumph of love and optimism over the mystery of our own mortality”.

It will feature music from the album alongside that of other Flaming Lips records including 2006’s At War with the Mystics and 1999’s The Soft Bulletin. Further information can be found on the theatre’s site.