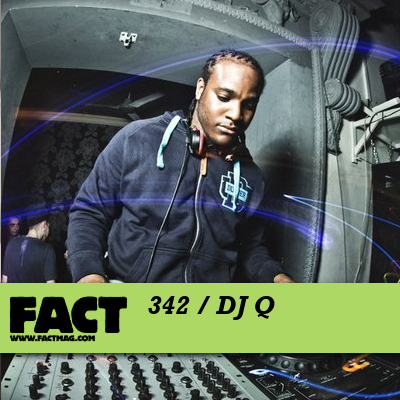 Of course, calling Q a bassline house artist is a little reductive. The Huddersfield native played an important role in the oft-forgotten dance music hybrid’s rise – to this day, he’s still one of only a small handful of DJs on mainstream radio that play bassline house, and singles like 2008’s ‘You Wot?’ are classics of the genre – but his class as a producer spreads beyond just bassline. Q’s remix of S-X’s grime anthem ‘Woooo Riddim’ landed in FACT’s top 5 tracks of last year, and 2012 has seen him earn more critical acclaim down South than ever before: first, the superb ‘All Junglist’ landed on Unknown to the Unknown, and then the vinyl-only ‘Brandy & Coke’ on Local Action [disclosure: a label run independently by FACT staff member Tom Lea] proved his chops as one of garage’s most natural producers.

Most recently, Q self-released The Archive, a compilation of his material from the bassline era, and more singles are planned for later in the year. The clue’s in the name, however: DJ Q is first and foremost a DJ, and FACT mix 342 – the sort of set he’d play in a club, as he told us when he submitted the mix – flies past, with a winning combination of established (Hackney Soldiers, Dem 2, Todd Edwards) and new school (Mista Men, TS7, Disclosure) garage, and plenty of exclusives by himself, mixed quick and hard the way we like it.

Q will be playing at Fabric’s Room 3 this Friday with Scratcha DVA, Throwing Snow, Slackk and Artifact. Room 1 sees sets from Plastician, Hatcha, Trim and Dismantle, while drum’n’bass label Critical take over Room 2.