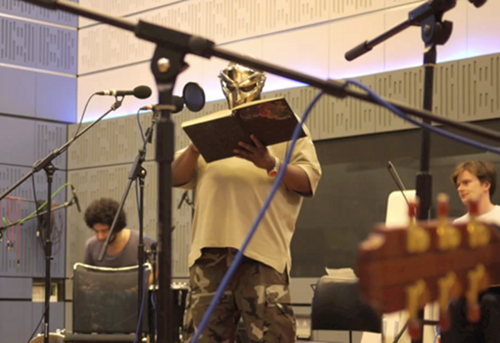 As fans will be well aware, DOOM’s latest album is a collaboration with Jneiro Janel under the name JJ DOOM.

Keys To The Kuffs is due out via Lex Records on August 20, and will feature guest appearances from Beth Gibbons, Damon Albarn and Khujo Goodie. In the meantime, DOOM paid a visit to the BBC Radio 4 studios to perform an as yet unheard cut from the album, ‘Winter Blues’.

Recorded live on Saturday morning with instrumental accompaniment in the form of drums, piano, cello and a nice bit of warbly saw playing, the track is an unexpectedly subdued affair – particularly compared to the hectic ‘Banished’ – but then DOOM’s range has always been one of his strengths.

It’s also just emerged that the duo will perform their debut live show in the Rizlab tent at this year’s Bestival on 7 September; to promote the fact, they’ve made another album cut, ‘Rhymin Slang’, available to stream.

You can stream ‘Winter Blues’, taken from Radio 4’s Loose Ends show, and ‘Rhymin Slang’, below.