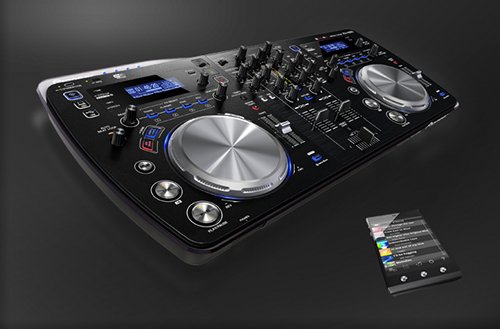 In short, the XDJ-AERO pairs two virtual decks – with CDJ style jogwheels and pitch controls, plus a beat sync button – with a mixer. Although all three come as one combined structure, the mixer can be used with external hardware, for instance, turntables or regular CDJs. You load tracks onto the device by creating a private Wi-Fi network (four devices can be connected at once: so that’s smartphone, iPod, tablet and laptop, for instance), and drag and dropping tracks from your chosen device onto a deck. Another neat feature: as the demonstration video below shows, you can trigger samples by tapping on the jog wheel and record sessions directly to USB. While skateboarding, if you’re that way inclined.

Pioneer’s stated aim is to “liberate DJs from endless cables and connections”, which as any DJ who’s played in a club – ever – will tell you, is a pain. No word on how much the AERO will set you back, but the video below shows off some of its capabilities.