The Olympics 2012 closing ceremony: what happened 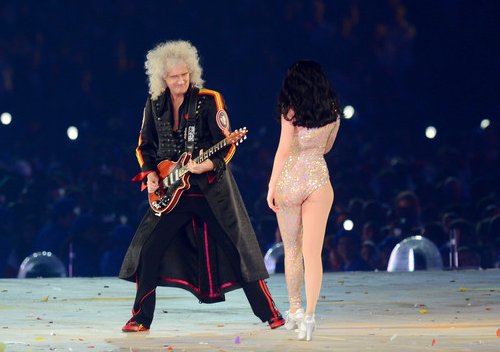 In truth, the closing ceremony wasn’t a patch on 27 July’s opening ceremony. Billed as a Symphony of British Music, its focus – unlike the opening ceremony – was almost completely on music, but for FACT it felt woefully out of touch: directed by Kim Gavin (as opposed to Danny Boyle, who helmed the opening ceremony), its portrayal of British music as almost entirely white rock and pop (plus token appearances from Tinie Tempah, Taio Cruz and some Bhangra dancers) felt inadequate, especially at an Olympic games where arguably Britain’s two stand-out performers were a Somali immigrant (Mo Farah) and half-Jamaican (Jessica Ennis). But regardless, that’s how it was, and this is who performed at it:

– As previously reported, The Pet Shop Boys (‘West End Girls’), George Michael (‘Freedom’, followed by new single ‘White Light’ which no one knew), The Spice Girls (‘Wannabe’, ‘Spice Up Your Life’), Muse (‘Survival’), Annie Lennox (‘Little Bird’) and One Direction all performed. The much-discussed Ed Sheeran performance was a cover of Pink Floyd’s ‘Wish You Were Here’ with the band’s Nick Mason, plus Mike Rutherford and Richard Jones, while the Kaiser Chiefs murdered The Who’s ‘Pinball Wizard’. Madness performed ‘Our House’ with the Hackney Colliery Band.

– Jessie J, Tinie Tempah and Taio Cruz performed several songs, including ‘Dynamite’ and a cover of The Bee Gees’ ‘You Should be Dancing’ after arriving in a barrage of limousines. Jessie J later reappeared to perform ‘We Will Rock You’ with Queen’s Brian May and Roger Taylor (J standing in for Mercury); this was preceded by a Brian May guitar solo that went on for what seemed like all night. 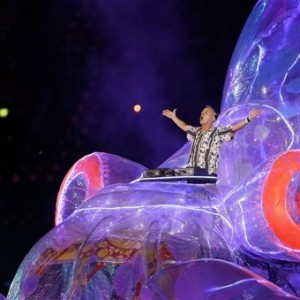 – The undoubted musical highlight of the night was Fatboy Slim. Introduced by Russell Brand (who’d covered The Beatles’ ‘I Am The Walrus’), the Brighton DJ appeared in a giant inflatable octopus with a pair of unplugged CDJs that he pretended to scratch on while ‘Right Here, Right Now’ and ‘The Rockafeller Skank’ played over the tannoy. At one point, he pretended to slow the track down, all with one of those two-channel mixers that cost about £60.

– David Bowie did not perform at either the opening or closing ceremony, despite ‘Heroes’ being the British team’s unofficial song, but his 1980 single ‘Fashion’ soundtracked a bizarre tribute to the fashion industry that saw Kate Moss, Naomi Campbell, Sophie Dahl and more on the catwalk.

– The Who closed the ceremony, performing ‘Baba O’Riley’, ‘See Me, Feel Me’, ‘Listening to You’ and ‘My Generation’, while Take That soundtracked the extinguishing of the Olympic flame with ‘Rule the World’. As rumoured, Liam Gallagher’s Beady Eye performed ‘Wonderwall’; reportedly, his brother Noel was originally asked but declined the offer. The Kinks’ Ray Davies played a very welcome ‘Waterloo Sunset’, but although that 2012 remix of Kate Bush’s ‘Running Up That Hill’ was played, Bush herself did not appear. Emile Sande, a highlight of the opening ceremony, re-appeared – unfortunately so did Elbow.

– There was some Seu Jorge, at least! The Brazilian musician took to the stage for Rio de Janeiro’s short preview performance of what their opening ceremony will have in store (they will host the games in 2016), joined by Pele. Who, unfortunately, didn’t indulge in any Diana Ross style football on stage.