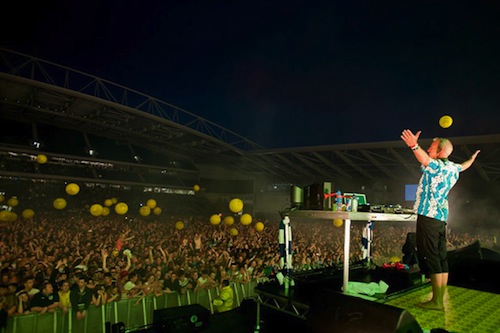 In June, Fatboy Slim attempted to recapture the magic of his legendary 2002 Brighton Beach gig.

Moving the Big Beach Bootique from the beach to Brighton’s Amex football stadium, Norman Cook played to 40,000 fans across two nights. While it didn’t reach the quarter-million strong crowd of that fateful 2002 concert, it was nevertheless recorded for posterity.

Fatboy Slim Live: From the Big Beach Bootique will be presented theatrically around the world on August 31. The Cinema Live production will let fans experience the entire technicolor experience; the concert film promises the type of visual extravagance that only a stadium EDM show can provide. At the very least, it should be better than Mr. Cook’s Olympic “performance.”