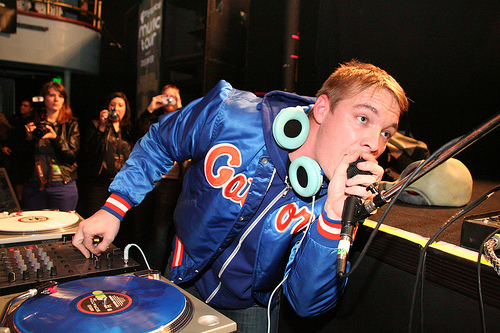 Update: Now there’s a video for the song, which takes the farm theme to absurd lengths. Watch it below.

The trendsetting Mad Decent producer adds a verse to Three Loco’s ‘We Are Farmers.’

Three Loco is an oddball rap trio comprised of Riff Raff, Andy Milonakis, and Dirt Nasty, who apart from being white weirdos, have all put in time on MTV (Dirt Nasty is the alter ego of former MTV VJ Simon Rex). The rap march ‘We Are Farmers’ is produced by Derek “DJA” Allen, but is most notable for featuring Diplo’s rapping debut.

Diplo holds his own, with a surprisingly deep-voiced flow, but we don’t expect him to end his lucrative behind-the-boards career anytime soon. Mad Decent will release Three Loco’s debut on September 4. As FADER reports, there might even be a Diplo-Riff Raff rap album in the works.