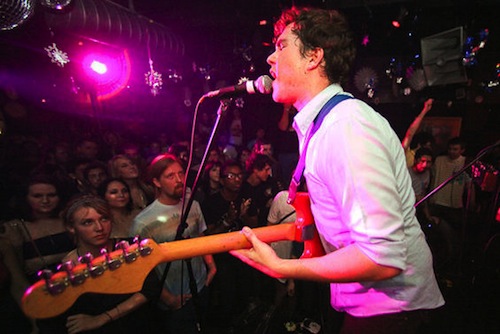 It has been revealed that the singer/guitarist for the South Florida indie rockers was arrested earlier this year for domestic battery.

According to public court documents obtained by Pitchfork, John Paul Pitts was arrested on March 31 after a domestic incident involving his girlfriend. The disturbing account of events, from the police report:

The victim stated on today’s date, Pitts and herself returned from an evening out. An argument pursued because she called a friend, stating she might need a place to stay. Pitts went into the bathroom and stated he was going to harm himself. When she knocked on the door, Pitts came out, they went into the bedroom, and the arguing continued. The victim stated Pitts grabbed her and flipped her over her shoulder, he then pinned her down by climbing on top of her. The defendant then proceeded to shove his fingers inside of her mouth. In return, she attempted to bite him and he pushed his fingers away. He continued to press his weight against her so she bit him on his chest. The victim stated this has occurred before. She told Pitts on numerous occasions she was going to call the police, but he just laughed. Advised she is not trying to ruin his life.

Pitts pleaded not guilty on May 4 and obtained a “plea and pass” agreement on July 13. If he complies with a court-ordered program, the charges will be dismissed in April 2013.