“Join us in a taste of freedom”: watch Pussy Riot trial closing statement 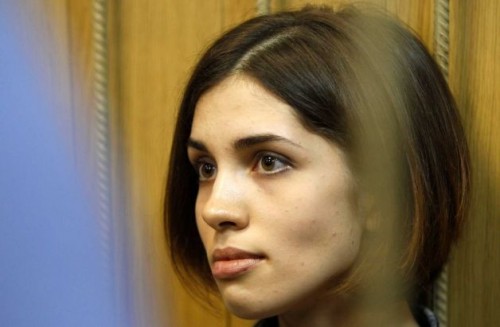 We, along with many, have been following the trial of Russian punk trio Pussy Riot closely.

The trial – in which the three women stand charged with “hooliganism” motivated by “religious hatred” after performing a punk song in a Moscow cathedral – concluded last week, with sentencing set for this coming Friday, August 17.

You can watch the lengthy closing statement of Nadezhda Tolokonnikova, one of the three women on trial, below [via Business Insider].

In it, Tolokonnikova declares that it is not just three women, but “the entire state system of the Russian Federation” which is on trial. “We were looking for authentic genuineness and simplicity and we found them in our punk performances”, she says. “Passion, openness and naivety are superior to hypocrisy, cunning and a contrived decency that conceals crimes.”

She compares the proceedings, which she describes as a “mock trial”, to the Stalinist troikas, before closing with a Pussy Riot lyric: “Open the doors, off with the shoulder-straps, join us in a taste of freedom.”

You can watch the statement below, and read the full transcript in English, via Pussy Riot Trial, here.