Jimmy Edgar and Machinedrum lift the lid on their new collaborative project, JETS

Jimmy Edgar and Machinedrum have revealed their new collaborative project, JETS. Two of dance music’s most distinctive personalities, the pair are playing their cards close to their chest and precise details of their imminent release on the Leisure System label are scarce at the moment, but FACT was able to jump on the phone with […] 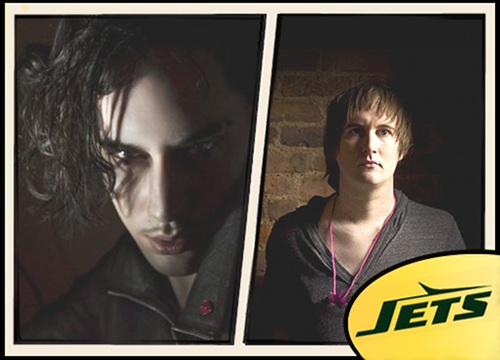 Two of dance music’s most distinctive personalities, the pair are playing their cards close to their chest and precise details of their imminent release on the Leisure System label are scarce at the moment, but FACT was able to jump on the phone with the duo to find out a little more about their decision to work together and what we can expect from the new material.

“It’s like how any band works… you have a group of people who are extremely emotional people, and you either have a lot of tension, or you’re trying to impress each other.

You two go way back, right?

Travis Stewart (Machinedrum): “We’ve known each other for maybe 12 years now. We knew each other from Merck Records, I was releasing some of my very first works on Merck out of Miami in 2000-2001, and I was actually helping Gabe from Merck go through demos that he’d been sent for the label, and Jimmy had actually sent in a double-disc demo thing, and I heard it, and encouraged Gabe to put it out. Then we ended up meeting at the Winter Music Conference in Miami that year, at a party called Infiltrate – this was back when IDM was a thing, kind of sad in a way [laughs].”

Jimmy Edgar: “And we went to Japan…”

Travis: “Yeah, we went to Japan, it was the first time we’d never done a proper tour, and we ended up going to Japan – we were babies, we were like 18 or 19 at the time.”

You both live in Berlin now – was that what enabled this project to happen?

Jimmy: “Me and Travis had always done little bits together here and there, even before Berlin. We lived in New York at the same time as well for years, but unfortunately the beast of New York is such that you don’t really get to see your friends all that much, so we weren’t doing too much together at that time.”

Travis: “But we’d have these random chance occurrences where we’d be able to get into the studio together, and we would start at least three or four tunes in that sort of situation, and we’ve basically on and off been working on the project for at least three and a half or four years.”


“We’ve basically on and off been working on the project for at least three and a half or four years.”

At what point did you decide that you actually wanted to release some of this material?

Jimmy: “I think anything we did together that was good enough was always going to come out, but we never really planned to do anything until we kinda had a few things going, and it started  to take shape. We let the music dictate its own pathway.”

Travis: “You’ll also notice that sonically the difference between all the tracks is stark in some ways, and a lot of that has to do with the time separation between the origins of the track, the original studio sessions, and when we actually got to wrap them up in the last few months. So you can kind of hear where we’ve been, and what we’ve come to, and everything.”

Travis: “What’s interesting is that since we’ve known each other for so many years, we’ve definitely been musical influences on each other for a long time. So it’s really good to finally come together, and when you listen to the tracks it’s hard to pinpoint who did what on each track – I think that’s because we come from very similar places musically.”

Jimmy: “I feel that Travis and I have both really grown up after a long time doing music professionally, and now we’re at a certain place where we have this respect for each other because we took kind of the same paths, but in parallel, and maybe in different directions in a lot of aspects. But first and foremost we’re friends, so it’s all about how we get on in the studio – it’s really seamless for us.”

To take a step back, what’s the music actually like?

Jimmy: “I hate describing my own music… I have my own view of what it is, but it’s not something you want to hear me describe; it’d just sound stupid. I don’t know, it’s definitely the alignment of our music together, so I think that people are familiar with our stuff would be able to say it’s us.”

Travis: “It’s definitely electronic, you can say that for sure. We’re both instrumentalists at heart and we both play various instruments and stuff, but we didn’t really showcase that on this record, it’s definitely more electronic and dancefloor-oriented. We hope that it works at home too, though.”

Jimmy: “It’s like how any band works… you have a group of people who are extremely emotional people, and you either have a lot of tension, or you’re trying to impress each other. And I think in this situation it was a bit of both.”

Travis: “We’ll see what happens… We didn’t really have any plans in the first place other than to collaborate because we needed to do it. We’re definitely excited about performing together, doing some sort of DJ/live kind of thing, because we’ve both been using Ableton for a while, so it’d be interesting to see what we can do together. But in terms of any long-term goal, it’s just a sort of wait-and-see kind of thing.”