Baroness sends a thumbs-up from the hospital after bus crash 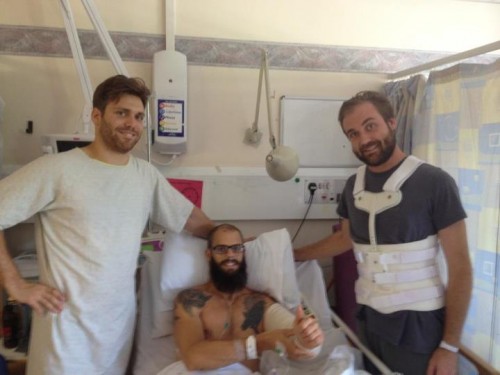 Baroness updates fans on the band’s status after the band’s tour bus crash.

Last week, Baroness’ tour bus crashed off a viaduct and fell 30 feet. Band member Pete Adams has been treated and released, while the other three (pictured) remain in hospital: John Baizley with a broken arm and leg, Allen Blickle and Matt Maggioni both with broken vertebrae. The metal band shared a comment via Facebook:

Thank you to all of you who have been sending the tidal wave of positivity our way. We are uplifted by its sheer magnitude, and power. Every single one of you is making our days and nights easier and our recovery quicker. Thank you all so much, we are truly lucky to have such incredible people on our side. A sincere and heartfelt thank you from each of us to each of you.

Please note: Pete is already back in the United States.