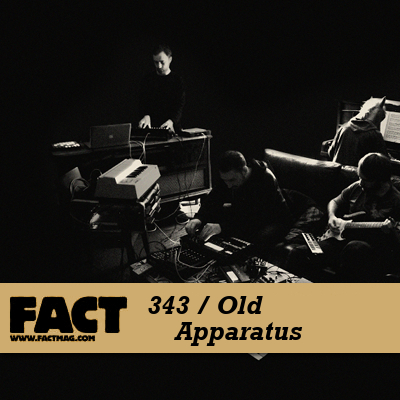 Following the rare interview we were granted with the group last week, we can now present Old Apparatus’ FACT mix.

The London-based group debuted in 2010, with a release on Mala (of Digital Mystikz fame)’s Deep Medi Musik label. As FACT’s Richard Rossiter explained in said interview, “the fact that it came courtesy of Deep Medi suggested an allegiance to dubstep, but the EP’s four tracks roamed far wider than that, with elements of blunted hip-hop, ghostly R&B, noise, industrial, techno and even post-rock.”

Now, the group have launched their own label, Sullen Tone. As they told FACT, they’re a group that “like to be involved with every part of the process”, and that perfectionist nature shines through not just in their music, artwork and slow emergence from anonymity, but in their mix for FACT, a carefully staggered session of slow guitars, breathless pop, synthesiser experiments and the darker end of dance music. Forest Swords, Belong and more feature.