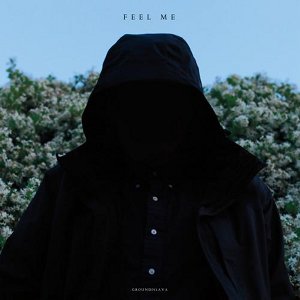 Available on: Friends of Friends LP

At the moment, the enigmatic LA producer sounds caught somewhere in the middle of influences. This is not a bad thing, as Feel Me lacks no ambition or confidence in how it sounds, which is its main plus. However, the songs constructed seem bigger than the voices Groundislava has given them, something mainly found in a recurring pattern of instrumentation; wavering, yet overpowering squarewave melodies, simple drums and thick block harmonies all occurring a little too regularly and unfortunately robbing some results of their potential.

However, the tracks themselves are solid, even when questionable in places. ‘Living Under A Rock’, for instance, has a lovely sullenness of tone around its jerking, shuffling 808 rhythm before it goes unexpectedly ‘witch house’, to either its strength or detriment depending upon your tastes. ‘Olympia 2011’ plods into an unexpectedly bright, dazzling fanfare of West Coast synths, playing between bold and subdued versions of its harmonic progression. It is joined successfully by a Michael Jackson-like rock beat, if less so by its wailing tremolo lead, although this can easily be forgiven.

Other places are more frustrating in their editorial choices. ‘Cool Party’ takes a lilting, Asiatic pairing of keyboard sitar and gamelan, but spoils the outcome through using tongue-in-cheek dirty South snares and dodgy samples, including the Troll 2 ‘Oh my God!’ internet meme. This is a shame, as with tighter arrangement it could have been comparable to the best of Kingdom and Nguzunguzu’s material.

However, where it works it does so well. In the Shlohmo-featuring ‘Bottle Service’ vocal expressions are looped in phrases under Groundislava’s moody, bare synths to good effect, like a slow XXXY. ‘Suicide Mission’, with guest vocalist Baths, revels in the strangeness of its Holy Other-meets-Crystal Castles ballad, and represents much of the producer’s strengths in terms of song construction and compelling harmony. ‘Flooded’, featuring Houses, reinforces this; a deep, hissy, hospitalised groove reminiscent of Radiohead and Actress’ ‘Harrier ATTK’, expertly executed.

The wooziness of ‘Cider’ and both ‘Jasper’s Song’ I & II are also beguiling examples of, like his instrumental productions for singers, something more introverted. Expanding the breadth of instrumentation used could be one way to advance in future releases, a glimpse of which is heard in ‘TV Dream’ with Clive Tanaka. However, stripping back even further, say, the excellent Analord-like spook-funk of ‘After Hours’ may be just as good; a particularly freaky, Drexciyan aesthetic.

Feel Me is very much a starting point, it seems, and from what it presents, perhaps this particular kind of self-involvement would result in the most beneficial achievement in future. And it could well be brilliant.