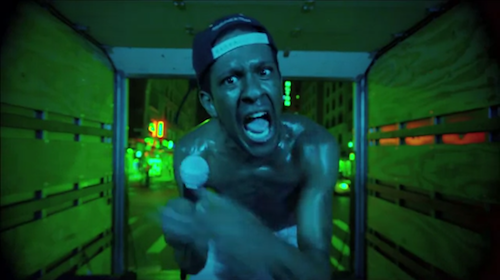 Head-turning rapper Mykki Blanco shares his most ambitious video yet for ‘Wavvy.’

Mykki Blanco is the drag alter ego of New York artist Michael D. Quattlebaum, and ‘Wavvy’ is his most accessible track. While that’s due in large part to a percolating beat by underground phenom Brenmar, Mykki’s nimble flow and sex-and-drugs hook carry the song.

In the video, directed by Italian filmmaker/photography Francesco Carrozzin, Mykki runs from the cops, raps in a mobile party van, and dons his drag presentation for a performance at a drug-fueled sex party. This is Mykki’s third eye-popping video, following ‘Join My Militia‘ and ‘Head is a Stone.’