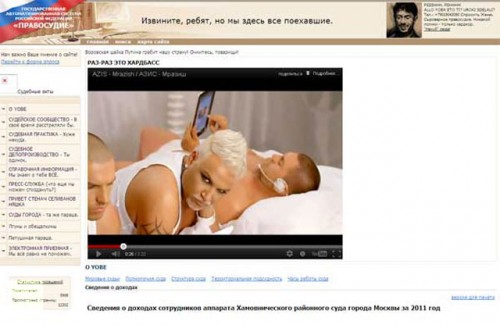 Hackers claiming to be part of Anonymous’ Russian chapter hijacked the website of Khamovnichesky court for three hours today [via The Guardian].

The attack was retribution for the court playing host to the trial of three members of Pussy Riot charged with “hooliganism” motivated by “religious hatred”, culminating in their being sentenced to two years in jail each last week.

For a brief period, the website was headed with the slogan “Putin’s thieving gang is robbing our country!”, alongside other pronouncements such as “Free Pussy Riot!” and “Judges – I’d have executed them all”. Pussy Riot’s new single was also posted on the site along with the tagline, “Wake up, comrades!” and a video by homoerotic Bulgarian popstar Azis.

Darya Lyakh, the court’s press officer, described the method of hacking used as being “chosen by people with bad imagination.” Pussy Riot lawyer Mark Feygin, meanwhile, said: “Of course I do not approve of hacking attacks, but [I] cannot hide genuine admiration for the daredevils from Anonymous. If they arrest them, I will defend them.”