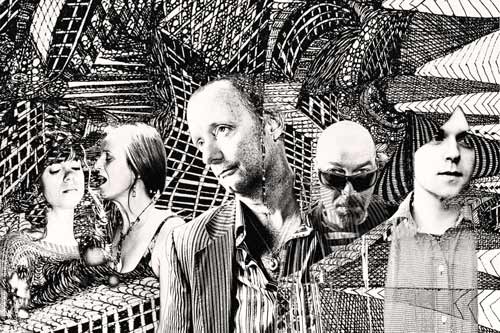 September 17 sees the vinyl-only release of Journey To Avebury, Myrninerest‘s soundtrack to the film of the same name by Derek Jarman.

Myrninerest is a project by conceived by David Tibet as a means “to work, outside of Current 93, with some of the artists and friends he admires the most.” Journey To Avenbury was composed to mark the group’s debut concert on August 4 as part of Antony’s Meltdown festival at London’s Southbank Centre; it’s based on ‘Crow Hotel’/’To Be Trapeze’, a piece written by James Blackshaw for the Myrninerest album “Jhonn,” Uttered Babylon. Tibet takes the vocal lead and is joined by Michael Cashmore (piano) and Andrew Liles (“electric rain”).

The single-sided 12″ release is limited to 1000 copies; no other format or edition is planned.  The cover art features stills from Jarman’s imagistic short, which was filmed on 16mm in 1971; the filmmaker would go on to become intimately involved with pop and experimental music scenes of the 1980s, working with Coil, Pet Shop Boys, Throbbing Gristle, Simon Fisher Turner and others along the way. Since his death in his work has continued to inspire new musical accompaniments and interpretations, recently from the likes of Max Richter and Cyclobe.