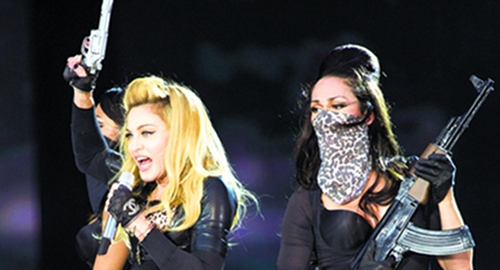 Madonna has released a statement, dubbed the MDNA Show Manifesto, to the Philadelphia Metro newspaper defending her use of fake guns in performances on her current MDNA World Tour.

The famously attention-shy pop icon, who is scheduled to play the city’s Wells Fargo Center tonight, said in the statement:

“It’s true there is a lot of violence in the beginning of the show and sometimes the use of fake guns – but they are used as metaphors.  I do not condone violence or the use of guns.  Rather they are symbols of wanting to appear strong and wanting to find a way to stop feelings  that I find hurtful or damaging.   In my case its wanting to stop the lies and hypocrisy of the church,  the intolerance of many narrow minded cultures and societies I have experienced throughout my life and in some cases  the pain I have felt from having my heart broken.”

Gun violence is a hot topic in Philly, which according to the Metro “has seen roughly 1,350 gun-related robberies and assaults and 79 homicides, the majority of them gun-related, just since the tour launched in late May.” This depressing statistic, not to mention the spate of mass shootings across the US in recent weeks, contributes to a feeling that Madonna’s on-stage gunplay might be more than a little insensitive.

“Philadelphia is known around the country as ‘Killadelphia,’ so it just isn’t a good image that we need right now,” style director and CEO of Evoluer Image Consultants Cheryl Ann Wadlington tells Metro. “Of course entertainers have the excuse, ‘It’s just art,’ but, well, they need to take their art somewhere else. … Madonna has always used, whether you want to call them publicity stunts or rebellious acts and behavior, sometimes lewd, to gain attention.”

“I just think that, again, it’s a Madonna antic,” Wadlington adds. “Sometimes celebrities will do whatever it takes to stay relevant and stay on top. She’s not ready to give up her crown.”

Madonna’s publicist Liz Rosenberg says:”It’s ludicrous to blame Madonna for the recent tragedies in this country and elsewhere.”

You can read the full MDNA Show Manifesto here.