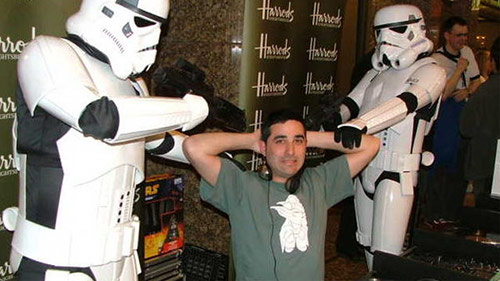 Turntablist and A/V wrangler DJ Yoda has a new album on the boil.

Since the release of his first How To Cut And Paste Mix Tape Vol. 1 back in 2001, Yoda has built a sturdy reputation as a thoroughly enjoyable, if relatively unchallenging, mixmaster and beatmaker. Given the number of mixtapes, production credits and bombastic live appearances he’s racked up, it’s easy to forget that Yoda only has one studio LP to his name, 2006’s The Amazing Adventures of DJ Yoda.

In Yoda’s words: “After he’d been spitting his lyrics over a loop it sounded like a classic Wu Tang track but I wanted more, a melody, a hook, a proper singer, so that was my first ever bit of songwriting.” The track’s got a jolly wee video to boot, which is basically Eminem’s ‘Stan’ without the melodrama (and with added noodles). [via Clash]

Chop Suey is due on November 5.