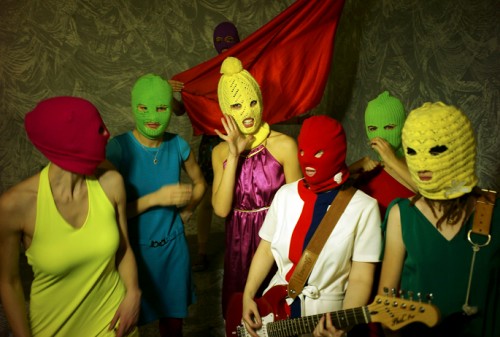 An exhortation to free the three members of Pussy Riot imprisoned earlier this month for “hooliganism motivated by religious hatred” has been found written in blood at a murder scene, according to reports [via The Guardian].

A 76-year-old and a 38-year-old woman were killed in the Russian city of Kazan during the weekend. The Russian federal investigative committee have since said that “The words ‘Free Pussy Riot’, presumably written in blood, were found at the scene of the crime, on the walls of the flat”.

A Russian paper, Tabloid Life News published images of the graffiti – written in English – while its owner, Ashot Gabrelyanov, tweeted: “If you still think that breaking the norms of behaviour in a church doesn’t change anything, then I recommend you read the latest news.”

Supporters of the band were quick to decry the announcement as an attempt to smear the opposition movement which has sprung up around the three women’s plight. They noted that a statement from investigators, as well as local news reports in Kazan, made no mention of the graffiti. Pyotr Verzilov, husband of recently imprisoned Pussy Riot member Nadezhda Tolokonnikova, described the incident as “an attempt to strike at all supporters of the group”.

It comes amid growing tensions between the authorities and Pussy Riot supporters, many of whom have taken to knocking over wooden crosses outside Orthodox churches across the country – a snub which has angered the country’s religious community. Several members of the band are still at large, suggesting that the saga should roll on for a good while yet.