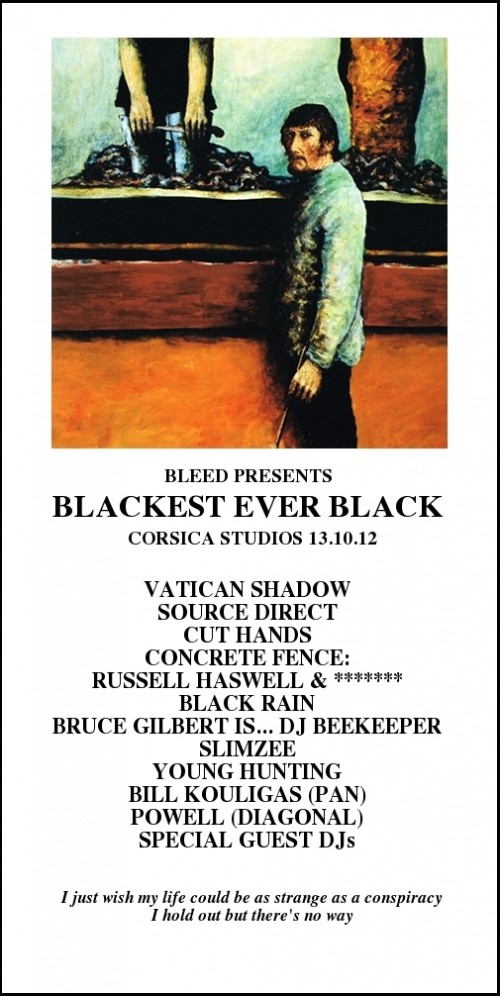 Blackest Ever Black will descend upon London’s Corsica Studios in October for a night of alienated sonics from across the stylistic spectrum.

As already announced, the night will play host to an array of performances from the label’s affiliates and friends: Dominick Fernow will present the UK debut of his “militant religious industrial” project Vatican Shadow, Whitehouse founder William Bennett will appear under his Cut Hands alias, and Young Hunting and Black Rain will both perform.

The label [full disclosure: independently operated by FACT staff member Kiran Sande] has now made a fresh batch of line-up announcements, confirming the night as an utterly unique fixture in the annual calendar. Foremost among them is a set from Jim Baker, the remaining half of Source Direct, the production outfit responsible for some of jungle’s most future-rushing, mindblowing moments. Of similarly hallowed status is Bruce Gilbert, formerly of Wire, who will be appearing as DJ Beekeeper – an alias he apparently invented “as an excuse to manipulate other people’s music” at techno clubs in the 1990s.

Elsewhere, Concrete Fence – a new collaborative project from Russell Haswell and an unnamed artist who “looms large in the Blackest cosmos” – will get its first airing, and grime progenitor and possessor of the grittiest, nastiest dubs from the genre’s early years, Slimzee, will DJ – as will PAN records boss Bill Kouligas, whose tastes straddle the boundary between abstract electronics and dancefloor fare with unique flair. Finally, London-based producer Powell, whose releases on Diagonal trade in a BEB friendly hybrid of searing industrial textures and a dystopic techno pulse, will DJ.

The night takes place on Saturday October 13 at Corsica Studios, Elephant & Castle, and a handful more guest DJs are yet to be announced. Advance tickets can be picked up here.