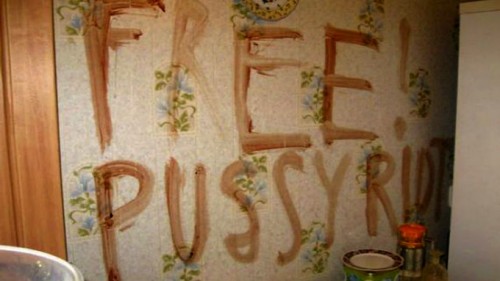 A 38-year old university professor has confessed to the murders and to leaving the politically-charged message in blood to confuse authorities.

According to The Guardian, Igor Danilevsky was detained on Thursday in Kazan in connection with the double murders. While his message may have fueled anti-Pussy Riot sentiments, it did not confuse investigators as planned.

Russia’s Investigative Committee alleged that Danilevsky wrote “Free Pussy Riot” in the victims’ blood because he wanted the deaths to appear as if they were a “ritual killing.” Danilevsky had been dating the 38-year-old woman and promised to marry her, after persuading her to pay his debts. Authorities have found the knife with which he stabbed the woman and her 76-year-old mother.

As expected, Kremlin-friendly media and the Orthodox church had used the double murders to cast Pussy Riot in a poor light, comparing the murders to those of Charles Manson. Some publications went as far as claiming that Pussy Riot “committed” or “inspired” the horrible acts.

The lawyer for the jailed members of the collective had called the incident “either a horrendous provocation or a psychopathic” case, and the husband of imprisoned member Nadezhda Tolokonnikova described it as “an attempt to strike at all supporters of the group.”