Will Saul announced as secret headliner of FOUND’s Street Warehouse after party. 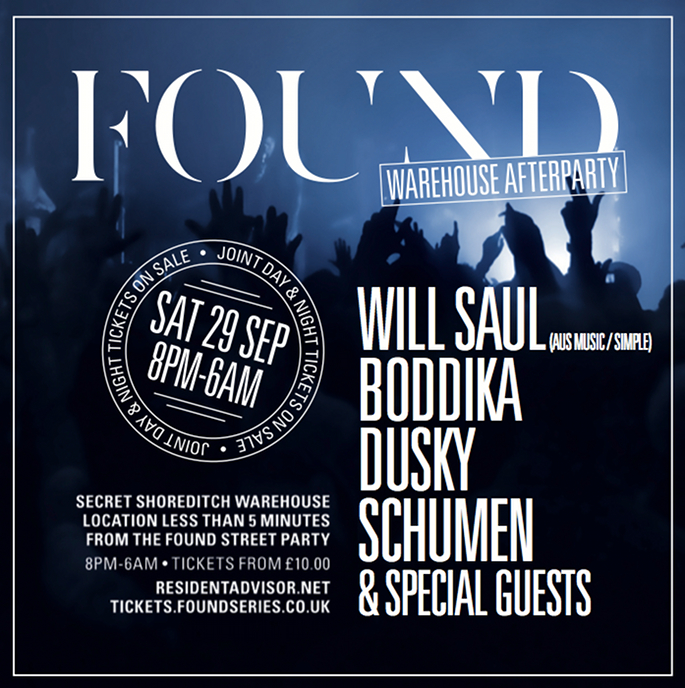 FOUND’s Shoreditch Street Party , featuring the likes of Todd Edwards and Huxley, already looks like a humdinger, and there’s going to be a cracking after party to boot.

September 29 will see FOUND take to Earl St. from 1.00pm until 8.00pm, and the festivities are set to continue at a warehouse just around the corner. The headliner, kept under wraps until now, is Aus Music boss Will Saul. As a label boss, Saul has patronised the likes of Joy Orbison, Appleblim and Ramadanman; as a producer, he’s been releasing aqueous house records on his own Simple imprint for years.

He’ll be joined by the almighty Boddika, who’ll be offering a state-of-the-nation survey of contemporary bass-weighted house and techno. Duo Dusky, currently making an impression with their punchy, syncopated strand of house music, will also be on board. Schumen and a host of special guests are also on the bill

The event will kick of at 8.00pm, and run all the way through until 6.00am. Tickets and further information are available here; those with tickets to the daytime party can enjoy a discounted rate.